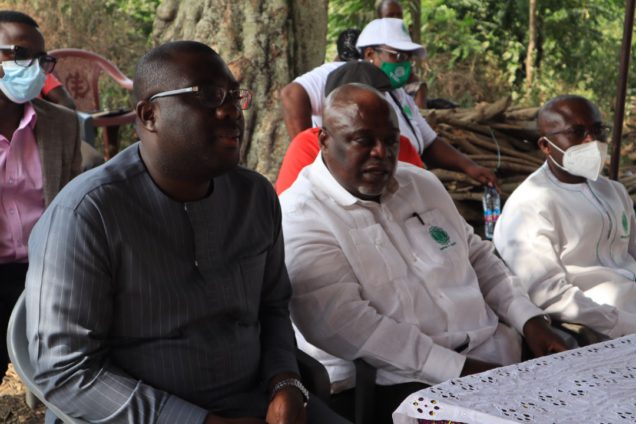 The Atta-Mills Institute (AMI) in partnership with the National Lotteries Authority (NLA) has commissioned a newly constructed corn and cassava mill facility, as well as renovation, works on a three classroom block unit for the Gonteng community in Aburi.

The donation was done on Thursday after the AMI, broke ground for the construction of the milling facility on September 19, 2021, completing the project in 4 months with the kind support of the NLA.

Speaking after the commission, Chief Executive Officer of AMI, Koku Anyidoho said “I give glory and thanks to God Almighty that we have been able to make this milling facility available to the people of Gonteng, and as I see the joy and happiness on their faces, my heart beams with satisfaction that AMI is serving humanity”.

“We also took on the school project to provide a more conducive atmosphere for the children to acquire knowledge and also to allow the teachers to function with a bit more comfort”.

The school has not only been thoroughly painted, but most importantly, the existing dilapidated chalk-consuming blackboards, have been replaced neatly with, white Marker Boards, and the necessary teaching and learning tools.

Thanking the NLA for its support, Koku Anyidoho said “AMI shall forever be grateful to Mr. Sammy Awuku and NLA for agreeing to partner us via its Good Causes Foundation, and we know that this is just the beginning of a long and lasting relationship as both Organisations collaborate efficiently and effectively to contribute to building a better Ghana. These projects are our, Covenant Projects, and we cannot stop thanking NLA for your immeasurable support in fulfilling this dream.”

On his part, the Director-General of the NLA, Sammy Awuku, congratulated AMI for the projects executed, as well as the judicious use of the support received by the Institute.

Sammy Awuku further stated that the NLA was more than ready to go into a long-term partnership with AMI to expand the frontiers of its good cause as a foundation.

“I want to assure my brother Koku Anyidoho that, NLA is not going to relent as far as partnering AMI is concerned. You have justified the need to be supported, and you can be rest assured that you will get the needed support”.

“The integrity of the Atta-Mills Institute has been established via these projects and you can be assured that the NLA would be more than eager to give you the possible support to grow in image and stature as far as your good work is concerned”, Sammy Awuku said.

Headteacher of the Gonteng Primary School, David Asamanti expressed gratitude to the AMI and NLA profusely, for such charitable service to the community.

“On behalf of Gonteng School and community, I wish to express our sincere and profound gratitude to the Atta Mills Institute and the NLA for their charitable service in donating to the community an installed mill and its housing facility and some renovation works for the school,” he said.

This year marks the 10th anniversary since the passing-on to the glory of the late, President John Evans Atta-Mills.

Founder and CEO of the Atta-Mills Institute, Samuel Koku Anyidoho, mentioned that “the real climax of the 10th Anniversary activities will be on July 24, 2022, when President Akufo-Addo, will commission the renovated Asomdwe Park in honour and memory of the late President John Evans Atta-Mills”.