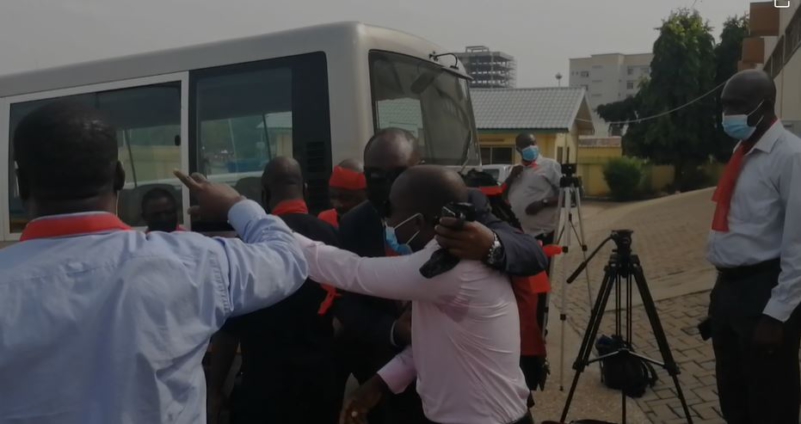 Some Staff of the National Lottery Authority (NLA) are demanding the immediate dismissal of the Director General, Kofi Osei Ameyaw over non-payment of big wins across the country.

Clad in red armbands, the staff members numbering over 50 chanted war songs amidst dancing and clapping.

They alleged that some of their members have received threats and in some instances been attacked due to the development.

“We are sending a message that we are not on strike. We are not demonstrating, we are just removing ourselves from the dangers that we see because our workers are being attacked,” General Secretary for the Financial, Business, and Services Employees Union of the NLA, Benjamin Mingle explained.

Giving further details, Mr. Mingle who spoke to JoyNews said a letter has since been sent to the Labour Commission to explaining the reasons for the development and the way forward.

According to him, workers will continue to withdraw their services until all concerns are addressed.

“NLA staff are being attacked in various regions by people who claim they have won and they have not been paid their wins.

“We thought it was one exception. However what has happened is that I got a report from Kumasi that from October last year up to February, NLA owes wins to the tune of about GH¢1.5 million. So the question is, why?

“But that aside, now the workers are being attacked physically and we realized that we have to do something about it. They claim they have reported to management so we wrote a letter on the 22nd of February and asked to meet so we can find solutions to these challenges.”

He said, the refusal of management to honour the letter written was the push members needed to take matter into their own hands.

“We came on Friday, as dated. We went to the MD’s office, he was present. We waited for 30 minutes, only to be told he has gone for a meeting.

“What is important is that he received the letter and the content actually showed that we should have met but to safeguard the interest of the work and our members we are removing ourselves from the work because the workers are being threatened and in fact in one instance the police had to rescue some of the workers in Tamale,” he said.

The demand by the NLA staff follows a similar call by staff of Ghana Airports Company Limited for the removal of MD, Yaw Kwakwa, over claims of mismanagement.

On Friday, February 26, a number of passengers were left stranded when domestic flights were disrupted due to a strike action.

The exercise was however temporarily suspended after some negotiations.

Speaking to the media, Deputy General Secretary of the Public Services Workers Union, John Sampah said after a brief meeting with Ministers designate for National Security, Employment and Labour Relations as well as Transport, the workers reached an agreement to have another meeting to resolve the issues/impasse.

DISCLAIMER: The Views, Comments, Opinions, Contributions and Statements made by Readers and Contributors on this platform do not necessarily represent the views or policy of Multimedia Group Limited.
Tags:
Kofi Osei Ameyaw
Labour Commission
National Lottery Authority
Strike Action