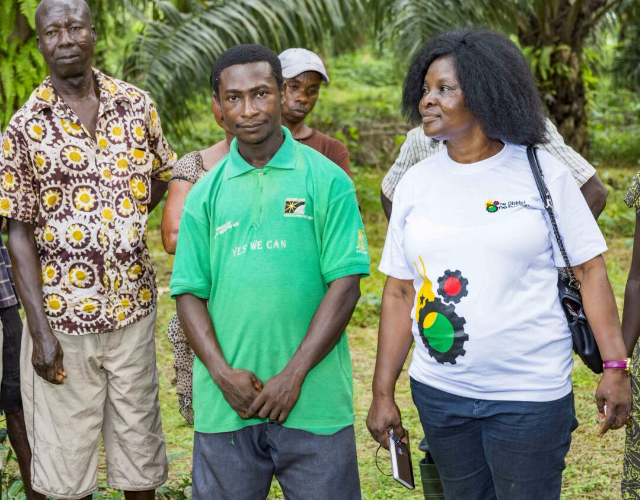 Barring any unforeseeable challenge, the next destination after Ekumfi for President Nana Akufo-Addo’s flagship One-District-One-Factory (1D-1F) policy is Bogoso in the Prestea-Huni Valley District in the Western Region.

The decision to locate the US$3.7million palm oil processing factory in Bogoso was sealed following the visit to the community by National Coordinator for the 1D-1F policy, Gifty Ohene Konadu on Wednesday, November 1, 2017, to appraise herself with the availability of raw materials to feed the factory, the prospects of the facility as well as the community’s preparedness towards receiving such a plant.

Issues of availability of a litigation-free land for such a facility was also highly considered during her visit which saw her interact with a number of stakeholders in the community including Golden Star Mining Company, smallholder farmers, traditional leaders and management of the Prestea-Huni Valley District Assembly.

need to build an oil palm mill for downstream processing to complement organic plantation growth in the Bogoso township.

Known as the Gold Star Oil Palm Plantation (GSOPP), the initiative has acquired a unique approach to land acquisition by soliciting land from the Traditional Authorities (seven divisional chiefs), who offer their land to become partners of the scheme.

Under the scheme, GSOPP provides funds for the development of the plantations through Gold Star’s financial commitment of US$1 per ounce of gold produced.

Selected and affected smallholder farmers participate as beneficiaries to the scheme. Under this arrangement, agreements are signed with the selected farmers where the cost of the plantation development is treated as loans (Revolving Fund) to the smallholder farmers.

Through this partnership approach, the major issues of land tenure associated with large-scale developments are eliminated. So far, GSOPP has developed 1,133 hectares of land in ten (10) communities where over 700 workers from the catchment communities have been engaged in this business.

The harvested products are sold to Benso Oil Palm Plantation where 70% of the revenue goes to the farmer and 20% is deducted as loan. 5% of the proceeds also go to the Landlord while the remaining 5% is retained by GSOPP as its contribution for field infrastructure.

However, the cost of carting the produce from the farm gate to the oil mill is very high, with the smallholder farmers, estimating a 20% loss in revenue.

This among others, according to the farmers, will enable them have more returns on their produce when an oil palm processing plant

is cited in the community.

Already, more communities are knocking on the doors of Gold Star mining company to enroll them onto their flagship oil palm plantation

project. Some of the farmers who interacted with Gifty Ohene Konadu outlined how beneficial the project had been to them and their

“With this work, I have been able to build a three-bedroom facility and a chamber and hall. I am also able to take care of my family by

paying the school fees of my three children without any difficulty, give my wife household keeping money and also pay my utility bills. In

2014, I was given an award as the best farmer in the District. I am hoping to expand my farm when the oil mill is cited here,” noted one

of the long-serving smallholder farmers.

Chairman of the Smallholder Farmers Association, Daniel Kwao Wiredu also said “Before GSOPP came on board; I was struggling to make ends meet. But when the mines came to our aid, our production doubled and now I am able to pay the school fees of my children with ease. My living standard has improved and looking forward to seeing Nana Akufo-Addo’s factory in this community”.

He complained bitterly about losing some of the palm fruits when carting or transporting them from the farm gate to the factory site.

This, he noted, also affects the revenue they generate from the sales of their produce and therefore pleaded with Hon. Konadu to fast-track the process of citing an oil mill in Bogoso to relieve them from the burden and cost in transporting their produce from one place to

Maxwell Owusu, a harvester, also told Madam Konadu to do whatever within her might to cite the factory in Bogoso, stressing that it

would help them maximize profit on their produce.

Madam Konadu responding to the concerns of the local farmers assured them that once funds for the facility is ready, she will do whatever she could to cite the facility in Bogoso to meet the aspirations of all.