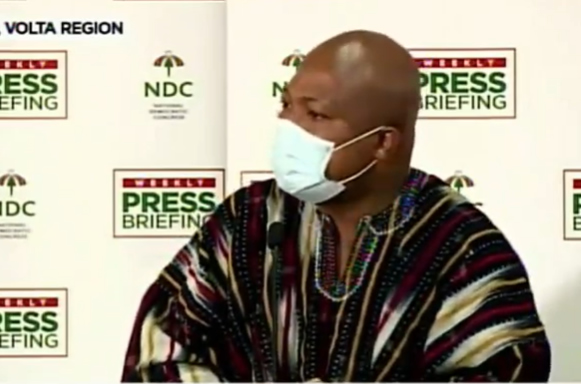 The Member of Parliament of the North Tongu Constituency has cautioned the ruling New Patriotic Party (NPP) against making discriminatory comments against Voltarians.

Samuel Okudzeto Ablakwa says such comments are likely to undermine national unity and must therefore be condemned.

“I want to send a clear message to the Akufo-Addo government that the discrimination; you know, the harassment of the minority groups must stop.

“If you see what happened during the registration – the political rhetoric when they’re discussing airport for example – you hear the Vice President [Dr Mahamudu Bawumia] say … ‘Voltatians are Togolese, they don’t have enough human beings in Hohoe’. All of those unfortunate rhetorics by political headliners should not be encouraged,” he said.

The MP made these comments while submitting his nomination form at the EC office in Aveyime.

Mr Ablakwa said the Minority MPs and Voltarians as whole will not accept intimidation such as calling Voltarians “aliens”.

According to him, in as much as the recent secessionist attacks in the region have been condemned, the NPP government must stop looking down on Voltarians.

“You hear the Vice President [Dr Mahamudu Bawumia] say that Cape Coast should rather have the airport and not Ho, which the NDC did for the Volta region, and all of that, you know it is not helping,” he said.

This comes after some persons suspected to be secessionists launched attacks on 2 Police Stations and the Ho STC yard in the Volta region.

The group made away with weapons which have since been retrieved by the Ghana Police Service.

However, the MP says, his constituency remains part of Ghana and urged his Constituents to resist any agenda to draw the Constituency and the region at large into secessionist movements.

“We have and will always remain part of Ghana,” Mr Okudzeto said.

Speaking on the December 7 polls, the legislator is optimistic the NDC will be re-elected, predicting that the NDC will score 98% in the polls leaving 2% to the other political parties in the area.

Mr Samuel Ablakwa Okudzeto noted that the NDC is fully prepared and ready to be in charge of the affairs of the country and bring back the development they started when they were in office.

“We are winning with 98% with the 2% to be shared among the other parties and we will continue with the development we started.”

The MP was joined by hundreds of residents and okada riders in the area with singing and jubilation as he submitted his forms.

He took the opportunity to reiterate the NDC Flagbearer John Mahama’s promise of legalizing and regulating the business as a means to promote employment among the youth.

He said the legalization of okada promised by the former president will be implemented when they are given the chance to govern the country again.

“The Okada legalization is going to be fulfilled by the incoming president John Mahama with all safety measures put in place,” Mr Ablakwa said

One of the okada riders who spoke to Joy News said the promise by the Dr Bawumia should be ignored as it is merely a campaign promise to win votes.