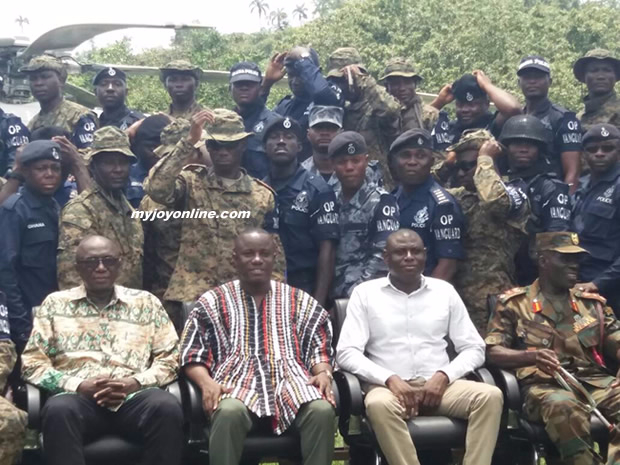 The leader of the National taskforce against illegal mining Col. William Agyepong has charged the Attorney General to fast track prosecution of suspects arrested at illegal mining sites.

So far, 294 suspected illegal miners have been arrested in the Western, Eastern, and Ashanti regions where a contingent of 400 soldiers and police officers have been stationed to stop the menace.

Code named Operation Vanguard, the taskforce since their deployment August 1 have been combing mining zones.

Some 35 days into their deployment, a government delegation led by Defence minister Dominic Nitiwul has visited the troops to learn firsthand progress in government's fight against galamsey.

Col. William Agyepong told the delegation majority of the arrested persons are between the ages of 18 to 34 years.

He said a speedy prosecution of the suspects can deter others and boost the morale of the taskforce.

Briefing the government delegation on their challenges, Col. William Agyapong said inadequate logistics have become a major constraint to the taskforce.

The limited number of vehicles and communication gadgets according to Colonel, has stalled their operations and in some cases defeated their resolve to end galamsey.

Col. William Agyapong has however expressed satisfaction at the successes the team has achieved within a short period.

Dominic Nitiwul after walking through vast areas of degraded forest was full of praise for the taskforce.

"People need to come down and see for themselves. If you don't see it yourselves you won't [fully] appreciate it" he told journalists. He expressed sadness that Ghanaians can destroy their own environment.

"Ghana, we need to sit up. This is not allowed in any country", he told Joy News' Latif Iddrisu.

Government has vowed to keep boots on the ground for as long as it takes to stop illegal mining. Information minister Mustapha Hamid has said the taskforce could last for two years.