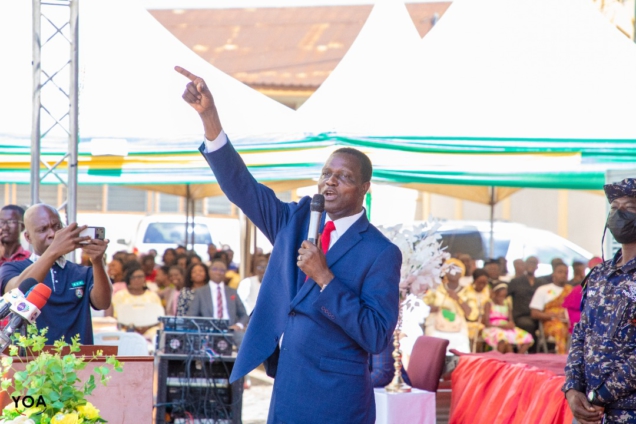 The Education Minister, Dr Yaw Osei Adutwum, has announced that the nation’s better days are ahead and not behind as he urges all to continue working hard for things to change for good.

He explained that, although the nation’s economy is facing some challenges due to the global financial crunch, this, he said would soon be over as the Economic Management Team (EMT) had put in place prudent measures for the economy to bounce back.

Dr Adutwum announced this when he delivered an address at the 20th anniversary and graduation ceremony of the All Nations University at Koforidua, in the Eastern Region.

The well-attended function brought together various stakeholders in the education sector such as parents, educationists, faith-based organizations, old students, business institutions and traditional leaders among others.

Awards were presented to deserving students and retiring and hardworking staff of the University in recognition of their effort towards the development of education in the institution and the country.

The Education Minister reminded the graduands to remain focused and be positive in their thinking since getting a job would not come easily and life after school is not going to be easy for them.

“Remaining positive and working very hard will surely push you forward towards your dreams, but this will not be easy to be attained, but it would surely come if you persist and work towards it,” he said.

Dr Adutwum, who is also the Member of Parliament for Bosomtwe, spent some time telling the gathering how far he had come as the son of a cocoa farmer growing up on a cocoa farm, but he was super determined to make it in life despite the initial financial challenges.

The President of All Nations University, Dr Samuel Donkor, commended the government for the effort being made to ensure that many people irrespective of location, political affiliation, religion, ethnicity and gender have equal access to education in the country.

He called on all stakeholders to continue complementing the government’s effort towards the provision of education since it is the main driver for economic development.

The President posited that the nation needs to shed the overwhelming burden of free secondary education for all to free up economic growth else it would continue to rely on aid and loans to sustain the economy.

DISCLAIMER: The Views, Comments, Opinions, Contributions and Statements made by Readers and Contributors on this platform do not necessarily represent the views or policy of Multimedia Group Limited.
Tags:
Dr Yaw Osei Dr Adutwum
work hard