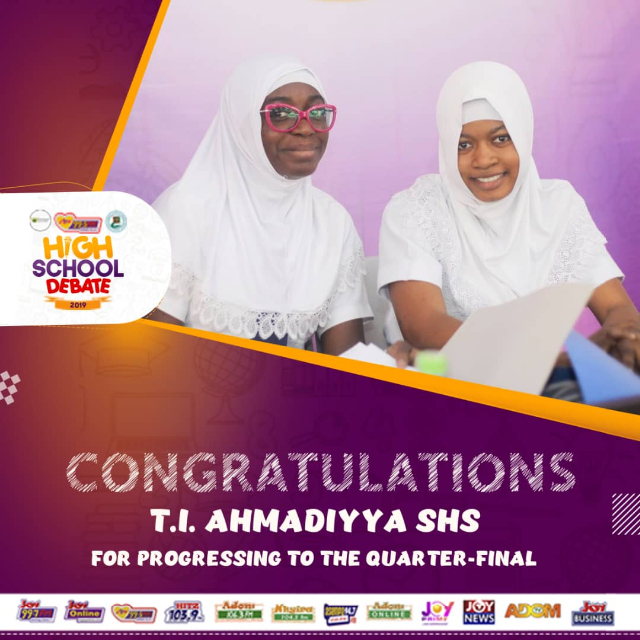 Defending Champions, T.I . Ahmadiyya Senior High School had to rely on just a point to bag qualification into the quarter finals of the 2019 edition of Luv FM High School Debate.

They beat Konongo Odumase SHS by 129 points to 128 to join Opoku Ware School who accounted for Anglican SHS to book places in the last eight.

“Even if MPs are beaten, manhandled and molested, in the absence of any law, how much more common citizens like us. We shall not be spared.

That is why we say, the passage of the law will put a permanent ban on all their activities.

In a repeat of their last year’s performance, KOSS, arguing on the contrary, gave AMASS a good run for their money.

Their Principal Speaker, MaameAgyeiwaa Flora, argued at a point that, there are many laws in this country but hardly are they applied and so the problems for which those laws were formed still persist.

In the end only one point separated the two sides, with T.I AMASS escaping with the slimmest of margins.

The second contest was between Kumasi Anglican Senior High and Opoku Ware Schools.

The subject for contention was, ‘’CHURCHES MUST BE REGULATED’’

KASS spoke for  the motion, ” they must be regulated because some churches are milking the common citizens, can you imagine they tend to even sell eggs in church, and other unpleasant situations we are all witnessing today.”

While OWASS opposed the motion.

”regulating the churches is only a way to silence the church who criticize the government who often go for unpopular decisions.

Again, most churches contribute to many developmental activities in the country like building schools and hospitals so asking them to be regulated might compel them to stop some of these things they do.”

The scores at the end of it all were 234to 229 in favour of the Akatakyie.

Saint Monica’s and KNUST Senior High Schools open the quarter final duels on Wednesday on the topic, “Military Rule is more Relevant to Our Political Circumstances than Multi-party Democracy”.

The second contest on the day will be between St Louis and St Jerome SHS, on the topic, “Africa Cannot Develop without a Continental Government”.