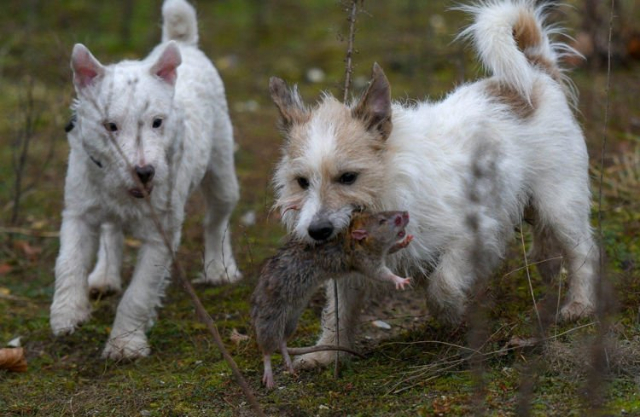 Most people think that cats are nature’s ultimate rat catchers, but they’re actually a lot less efficient in catching and killing rodents than dogs.

Rats are known to breed at an alarming rate, and in the English countryside it’s easy for farms to be overrun by disease-spreading rodents. When rats become too much for farmers to handle, it’s up to small companies like Suffolk and Norfolk Rat Pack to come in and clean up with the help of some small but exceptionally skilled rodent hunters.

Suffolk and Norfolk Rat Pack specialises in training dog breeds that genetically designed to catch rats; they travel all around the UK helping farmers clean up their rat infested properties in a matter of hours. Their most successful endeavour yet occurred earlier this month, when a pack of eight dogs managed to kill no less than 730 rats in only seven hours.

“This is what the dogs are bred for. It is in their DNA to hunt,” Ed Cook, the company’s 34-year-old manager said. “We don’t really have to train them because it’s their instinct to catch and kill rats. All dogs will play fetch but these dogs will go to extreme lengths to catch the rats.”

The record rat culling took place at a pig farm near Eye, Suffolk, on January 12, with the eight dogs of various breeds – Norfolk terriers, Whippet, Patterdale, etc. – working tirelessly and efficiently at finding and killing all the rodents they could find. Before the eight dogs were released, the farm was crawling with rodents, some over one kilogram heavy, but in less than a standard eight-hour work day, the canines managed to clean up the massive infestation.

“Some of these rats were almost as big as the dogs, it was incredible to watch. The dogs are incredibly brave and it’s remarkable how many rats they can catch, they just love it,” Ed added. “When rats are poisoned it is a horrendous death and it can take up to 48 hours. It’s slow and painful. This method is traditional and brings working dogs into good use. At the longest it takes three or four seconds for the Terriers to make the kill.”

Even for the guys at Suffolk and Norfolk Rat Pack, the 730 rats caught in less than seven hours came as a bit of a shock, considering they only had eight dogs working the place. It just speaks of their tenacity and natural rat hunting instinct.

“Once they are given the exposure to the rats they chase them down automatically. It’s ingrained in their DNA,” Ed Cook confirmed.