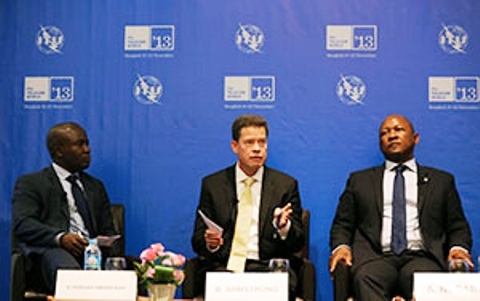 Panelists discussing “Economic Impact of the Internet in Africa” at the just ended ITU Telecom World 2013 in Bangkok, Thailand on International Telecoms (WCIT-13) have proposed a change of name for telecom industry regulators from “Regulators” to “Enablers”.

They explained that in the 1970s when the International Telecoms Union (ITU) chose the name “regulators” for institutions like Ghana’s National Communication Authority (NCA), the intention was to create an enabling environment for the industry to thrive, but now the mode of regulation is inhibiting rather than enabling industry growth.

One of the panelists, Andile Ngcaba, Executive Chairman of South African-based Dimension Data said “we need to rename the child from Regulator to Enabler because the industry regulators seem to be obsessed with the regulator mentality and their mode of regulation has become one of stop this and stop that and pay this and pay that.”

Ngcaba said on hind sight, he thinks the ITU made a mistake in choosing the tag “regulators” for institutions intended to be “enablers”, adding that it is not too late to reverse the clock and rename them to give them the right orientation towards the industry.

“Africa is a wireless continent so this first come first serve mode of allocating spectra is not the best – we need to encourage shared infrastructure so we can expand to cover the un-served and under-served quickly,” he added.

He said there are 200 million Africans left to be including in the digital revolution and those 200 million are rural dwellers who cannot afford the high cost of service so regulators needed to enable the industry players to extend affordable services to them.

“This mode of regulation that places impediments in the way of service providers and investors cannot continue if indeed we want to reach the remaining 200 million Africans who live in poor areas and cannot afford to pay for all the additional charges that the regulators place on the telcos,” he said.

“The term ‘telecoms’ will be completely lost in the next five years and ‘internet’ will be the key word. Voice service will then either become absolutely free or be part of data packages. This requires deep pocket investment into the expansion of internet service to the rural areas now, but the current mode of regulation is a disincentive to investment,” Ngcaba said.

Ngcaba is convinced that “open access is the best route to go for Africa. We should allow for open access in LTE, digital dividend spectra and fibre. We should create common platforms under an open access model so that people can provide affordable service.”

He argued that the most affordable way to reach the rural areas is not through fibre and microwave but through satellite and satellite could only be affordable if Africa had its orbital slots.

Ngcaba said governments and regulators should therefore be moving towards policies that would encourage the required deep pocket investments for the acquisition of satellite and orbital slots in space.

He is calling on Africa governments to put their forces together and fight at the ITU for the ownership of “our own satellite and orbital slots so we can make service affordable to our rural poor.”

“These orbital slots were created when African countries were colonies of other countries but now we are independent so we can use regulations at the ITU – we can come together and use our votes to get a fourth region or we can purchase our own satellite,” he said.

Ngcaba acknowledged owning a satellite and orbital slot is very expensive but insisted that “we can acquire one through a public private partnership across Africa to raise funds and buy out one of the western satellite companies that already have a presence in Africa.”

He is also urging telcos to do better engineering at base stations to ensure low fuel consumption and use off-grid sources of power in order to make service affordable for the rural folk.

“Smartphone manufacturers would also be required to come up with handsets that consume less power with batteries that could last for at least three days even when in use 24/7,” he said.

A director at US-based McKinsey and Company, Safroadu Yeboah-Amankwah said the current mode of telecom regulation is negatively affecting corporate Africa as a whole, because the impeding policies and measures do not only affect the network operators but much more their corporate clients who provide jobs and income for several Africans.

Meanwhile, a research conducted by McKinsey and Co. predicts that if the growth of internet moves as fast as that of mobile technology did in Africa, the current US$18 billion ICT contributes to the GDP of Africa, would rocket to US$300 billion every year, but change in mode of regulation to encourage investment is a prerequisite to that possible benefit.

The study, titled “Lions go digital: The Internet’s transformative potential in Africa” also estimates that the current number of 167 million internet users in Africa is set to more than triple to 600 million by 2025.