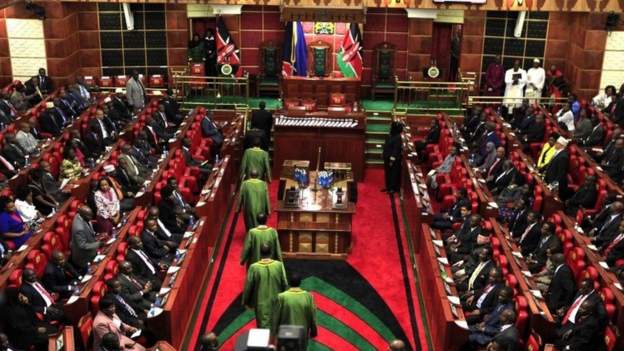 There was a scare on Thursday when a Kenyan member of parliament said colleagues were unsafe during proceedings because one member was armed.

The MP, Elisha Odhiambo, informed the speaker that he had seen what looked like a gun behind the coat of his colleague, Mohamed Ali.

Speaker Justin Muturi asked Mr Ali to confirm if he was carrying a gun.

“My apologies, I forgot to leave my things outside. I am a human being,” he said.

Speaker Muturi asked Mr Ali to confirm if he was carrying a gun.

“Mr Speaker, allow me to surrender,” Mr Ali said as the parliamentary broadcasting unit panned the camera away.

He was asked to deposit it outside with the sergeant-at-arms as required by law.

The speaker urged the sergeant to be vigilant and enforce the rules branding it a “terrible oversight”.

Mr Ali lashed out at his colleague for publicising the matter and said it was politically motivated, as both support different parties.

Kenyan legislators have been divided by ongoing calls for proposed constitutional amendments. The president and his deputy are on different sides in the referendum push.