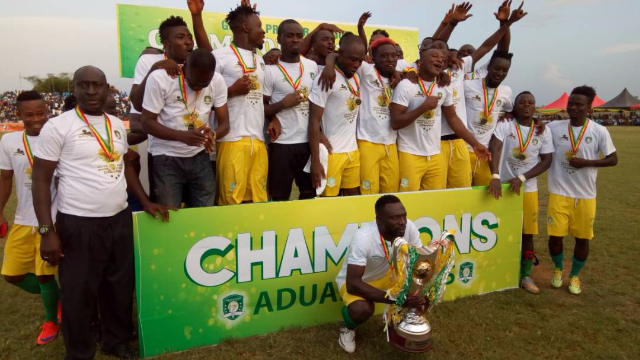 The Nana Agyeman Badu Park at Dormaa-Ahenkro was the centre of attraction on Sunday as people from far and near throng the small town to witness the coronation of the new Ghana Premier League champions, Aduana Stars.

This is the second time the Fire lads have been crowned champions of the top flight after lifting the trophy on their debut season in 2009.

The Dormaa-based club were presented with the League trophy after beating Berekum Chelsea 2-1 in a coronation match.

After missing the title narrowly last season under Romania’s Cioaba Aristica, Aduana Stars appointed Coach Yusif Abubakar, who bagged 57 points from 30 matches with the unflinching support of the Dormaahene, his technical team and the Chief Executive Officer (CEO) Albert Commey.

The Dormaa-based club are already looking to the future with hope as they kick-start the upgrading of their home ground to meet the standards of the Confederation of African Football (CAF) and help them achieve their CAF Champions League group stage target.