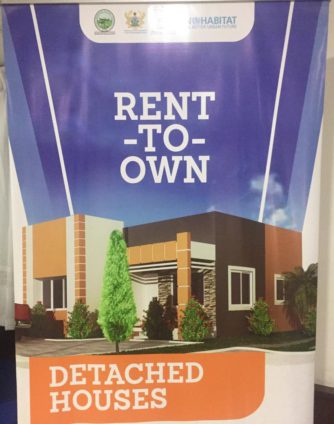 Rent-to-Own is a hybrid workable housing delivery system pivoted on making good planning and engineering for Ghanaians, inclusion of low-income groups and maximizing spatial development for current and future needs.

Speaking at a media soiree, Project Manager of the Planned City Extension Project, Daniel Ohene Aidoo, disclosed that Rent-to-Own is an income responsive housing targeted at easing the pressure on civil servants and government workers to acquiring a home.

He explained that the project comes in two options at Ningo-Prampram district.

However, the payment increases by 10% each year until the eleventh year where it remains constant until all payments are made.

Again, Mr. Aidoo indicated in case of misfortune such as temporary loss of income or client becomes invalid or death, a member of the Housing Cooperative “in Good standing” will be supported to recover, depending on the number of years that he or she has paid for the house.

Meanwhile, the project manager revealed that there is absolutely no support from government yet towards this agenda of addressing the country’s rising housing deficit.

According to Mr. Aidoo, there will be other packages for private workers and media personnel soon as they look to extend the project to other parts of the country.