Police avert clashes in land dispute between Okyenhene and Adoagyirihene 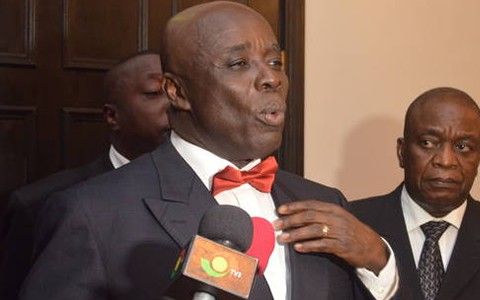 The timely intervention of the Nsawam police averted what would have been a blood bath between supporters of the Okyenhene, Osagyefo Amoatia Oforipanin and loyalists of the Adoagyirihene of Nsawam Nana Dompah, Monday.

The two chiefs are claiming a piece of land said to be located along the Nsawam-Kumasi road.

According to the Nsawam District Police Commander, Superintendent Akwasi Kankam Boadu, the Mponuahene, Nana Annor Dompreh II, who was acting on the authority of the Okeyenhene decided to develop part of the land but was met with fierce resistance by the youth of Adoagyiri.

The police intervened to restore law and order only for the mercedez benz belonging to the Mponuahene to be stolen and burnt later in the evening.

"The Adoagyiri chief is claiming this land and the Okyenhene is also claiming this land. When we heard that the Mponuahene was performing  such a function we saw that there was going to be a problem and the police rushed there and truly if we had not arrived there on time there will be some skirmishes because the youth of Adoagyiri were in their numbers rushing with the intent to attack these people," Superintendent Kankam Boadu told Citi News.

According to him, the police advised the Nana Dompreh to halt any further development of the disputed  land until all security issues have been resolved.

Kankam Boadu explained that the chief, heeded to the advice of the police, left his mercedez benz on the disputed land and went to Ofankor to get somebody to drive a bulldozer away from the land.

On his return, his mercedez benz was nowhere to be found.

Police have begun investigations into the matter.