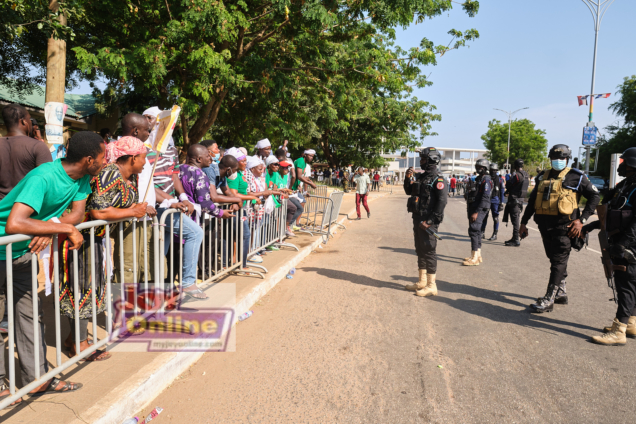 The Ghana Police Service has called for adherence to the Public Order Act regarding the unsanctioned assembly in parts of the country post-election.

The security agency noted that some of these activities fly in the face of the law and have the propensity to cause damage of state and private property.

According to the Director of Public Affairs for the Police, Supt. Sheila Kessie Abayie-Buckman, “such assembly including demonstrations fall directly under the Public Order Act, 1994 (Act 491) and places an obligation on persons who desire to hold demonstrations or special events to give notice to the Police of such intention in a period of not less than five days before the date of the event.”

She also noted that ‘the Public Order Act obliges participants to obey the directions of police officers safeguarding the proper movement of other persons and vehicles and generally maintaining order’.

The Police administration further called on organisers and participants of such events to give due regard to the laws of the country adding that failure to notify the police of any special event amounts to an offence which can lead to various penalties including imprisonment.

“If any crimes are committed in the course of such unlawful demonstrations, all participants are jointly and severally responsible for the crimes.”

They, however, assured the general public of the measures put in place to contain unlawful demonstration which results in property damage.

Expressing regret for inconveniences created by the closure of some roads and facilities due to such spontaneous protests, the police said such actions are necessary for the protection of lives and property.