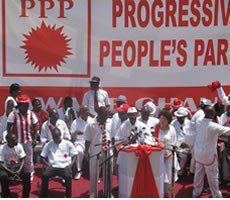 Although majority of Ghanaians have been complaining about economic hardship in the country, the youth of the Progressive People's Party have stated that the government can never take blame for the problems; instead Ghanaians who, despite all warnings about the Mills- Mahama administration, chose to still keep in power John Dramani Mahama.

In a press statement, the party said ‘it is nonetheless a fact that the country has been undergoing turbulent times without the President and his government offering any better solutions. Taxes upon taxes have been heaped on Ghanaians but we are yet to see the impact of the taxes as the country still have to make use of the makeshift structures bequeathed us by past administrations".

Divine Nkrumah, National Youth Coordinator of the party who signed the statement, noted "preparations are yet to be made to change the structure of the economy from the Guggisburg economy to a modern independent one. But we find it difficult to understand why Ghanaians keep complaining about the government,”

“Who voted for the NDC? Are the people who voted for President Mahama not Ghanaians?” they queried.

“We are of the opinion that the time for Ghanaians to end the complaints is now, and live by what they opted for in 2012 elections, which is the bad leadership we are experiencing now.

What positive results were we as Ghanaians expecting when we decided to vote for the NDC? After all, the good book says we reap what we sow; and since we called for the music, we must dance to the tune,” the PPP youth underscored.

They admonished Ghanaians to instead of complaining, start to think about how to endure these tough times until 2016 “when we will have the opportunity to build and choose the right leadership.”

They charged the electorate not to make the mistake of voting the National Democratic Congress into power, but instead vote for the Progressive People's Party to bring about the massive development the people are looking for.

“We should vote for competence over mediocrity, development over stagnation, quality life over starvation,” the statement advised.

According to the PPP, all hope is not lost because 2016 is just around the corner – as it will present an opportunity for Ghanaians to once again vote for somebody who has the demonstrable record to deliver.