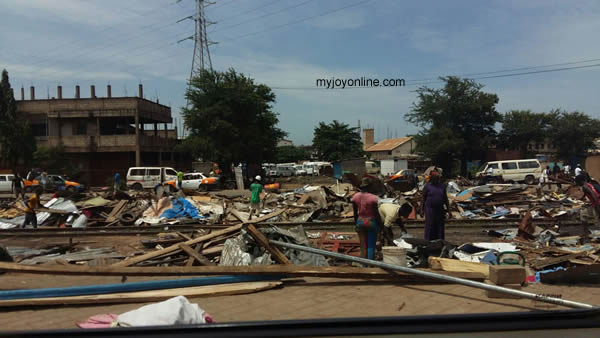 Appearing before parliament today, Deputy Local Government Minister Nii Lantey Vanderpuije indicated that the various assemblies have been notified of the President’s directive and already some have started working it out.

The directive means the ongoing demolitions in Accra is set to be replicated across various Metropolitan, Municipal and District Assemblies (MMDAs).

Some MMDAs such as Ketu South Municipality which have not yet started say they are yet to receive official communication. Nonetheless, measures are already in place to carry out the President’s directive, MCE Pascal Lamptey told Joy News Wednesday.

Already Ghana’s biggest slum Sodom and Gomorrah (Old Fadama) has been erased from the city’s landscape in a three-day demolition exercise last month.

Last week, Avenor also in Accra became the latest stop of the AMA taskforce. At the Abuja slums near COCOBOD in Accra, a fire outbreak Tuesday night, spared the need for the AMA’s bulldozers to move in.

The AMA has however warned the affected not to rebuild any structure.

But the demolition exercise has come as a yet to be documented social cost. Several hundreds of families have been displaced and poverty is set to worsen among the displaced.

Many are still looking forward to government to re-settle them.

The Local Government Ministry has failed to state the number affected or provide comprehensive mitigation package for the affected.

“Nobody knows where they have gone to, nobody seems to care” the Dean of the Local Government Institute Dr. Eric Oduro Osae observed on Joy FM’s Newsnight

According to him, Section 52 of the Local Government Act enjoins government to give notice to illegal residents before demolition exercise can be carried out.

The Act also provides the affected the opportunity to explain to the Assembly why their structure should not be demolished.

He advised any one affected or yet to be affected by the demolitions to take legal actions if the Assembly failed to provide prior notice.

He expressed disappointment that the Local Government does not have “baseline information” on those affected by demolitions.

To him, a database on those affected is basic function of the MMDAs.