Press freedom: Journalists end up in jail for reporting on coronavirus crisis 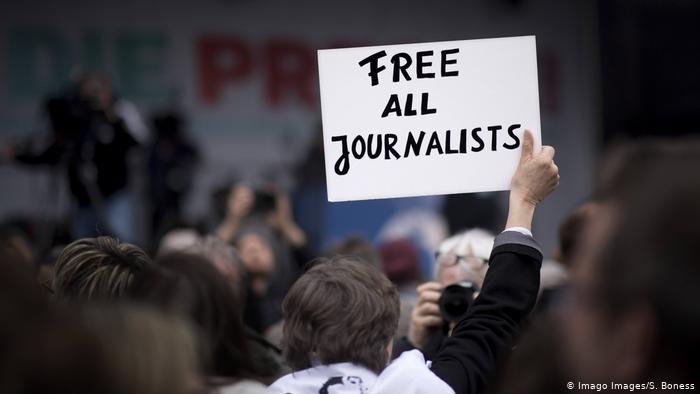 Hundreds of journalists are in prison worldwide for not giving in to government censorship, according to the German chapter of Reporters Without Borders. The findings were published in its annual report on press freedom.

At least 387 people working in the media industry around the world had been imprisoned by December 1 of this year, the German office of the press freedom NGO Reporters Without Borders (RSF) announced in its annual report on Monday.

Five countries were responsible for over half of all convictions: China led the pack with 117 jailed journalists, followed by Saudi Arabia (34), Egypt (30), Vietnam (28) and Syria (27).

While the majority of imprisoned press workers were still men, the number of women arrested in 2020 increased by a third to 42.

Dangers of reporting on the COVID pandemic

Since the outbreak of the global coronavirus pandemic early in the year, over 130 members of the press, be they journalists or otherwise, have been arrested for reporting on the crisis. Some 14 of those were still in jail at the time of the report’s publication, said the report.

“The high number of imprisoned journalists worldwide throws a harsh spotlight on the current threats to press freedom,” said Katja Gloger, the head of the RSF German office.

Gloger condemned the response of far too many governments to protests, grievances or the COVID-19 crisis with repression against the “bringers of bad news.”

“Behind every single one of these cases is the fate of a person who faces criminal trials, long imprisonment and often mistreatment because he did not submit to censorship and repression,” she added.

Her colleague, Sylvie Ahrens-Urbanek, highlighted one particular example of reprisals for reporting on the coronavirus pandemic — the case of investigative journalist Hopewell Chin’ono from Zimbabwe, who was arrested for reporting on the government’s sale of overpriced COVID-19 medication.

He was “brutally arrested,” said Ahrens-Urbanek, and spent a month and a half in prison. Release on bail was repeatedly refused.

Worsening situation in wake of restrictions

Reporters Without Borders gave particular attention to Belarus, where at least 370 journalists have been arrested in the wake of the contested presidential election on August 9. Although most of those were released after a short period, the crackdown on journalists represents a reduction in press freedom.