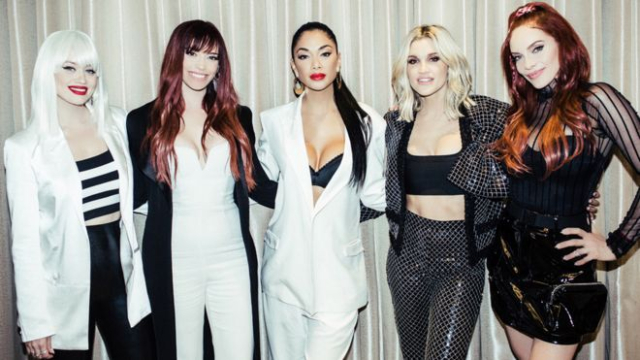 Nicole Scherzinger has revealed the Pussycat Dolls comeback left the group battered and bruised as they fell off the stage during their epic performance on X-Factor: Celebrity.

For those who missed it – for reasons we could never possible fathom – the five-piece, who have reunited without Melody Thornton, performed a medley of their biggest hits, jumped off the stage into a pit of back-up dancers, got doused in water and threw themselves on the floor like crazed kittens.

Honestly, it was a ride.

However, there were dangers behind pulling off such a spectacle, as Nicole laid out.

“We had to rehearse it; it’s so dangerous. We got scratches and bruises from that,’ the 41-year-old confessed while speaking to Australia’s Nova 96.6 radio station.

“It doesn’t look that high. But when you’re up there your throat dries up real fast. ‘[I like to do dangerous stuff] But that was a whole other thing. Because they want you to kind of fall gently suspended in mid-air, then twist, it was so scary.”

Well, she better get used to it because fans will be expecting the same level of death-defying stunts when the girls embark on their highly-anticipated arena tour next year. It’s the first time the burlesque troupe have sung together in more than a decade – so naturally, expectations are high.

“We want to put on the greatest show for you guys. We’re going to blow you all away,’ Nic continued. ‘It’s official, it’s actually real to us. We can’t believe it.”

Saturday’s performance was met with huge raise from PCD fans as the ladies undeniably slayed. Although, more than 400 viewers actually took time out of their day to complain to Ofcom because showing a little bit of leg proved too much for the family show. One concerned mother called their get-ups ‘x rated’, even though they were mainly covered up in full bodysuits…