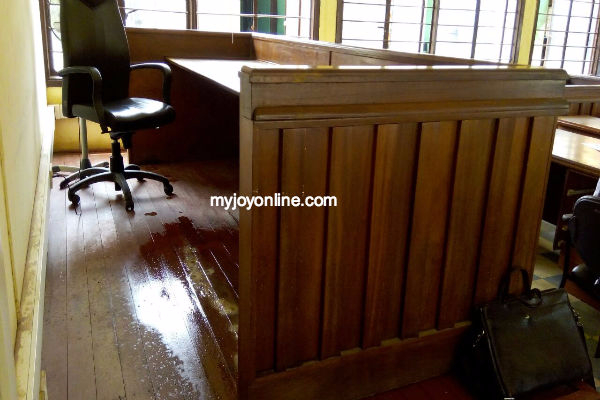 The deplorable conditions of at the Kumasi circuit court 3 shows no sign of abating as court proceedings Tuesday was forcibly cut short due to rain.

The sitting judge could not bear the dripping water from the leaking roof and had to vacate her seat.

A wearisome leaking concrete roof wets her seat whenever it rains as one by one litigant are ushered into a small cubicle for a hearing to continue, albeit that room is also leaking.

Last Friday, Myjoyonline.com reported about the looming disaster as justice delivery at the Circuit Court 3 suffers because the building housing the court has become a death trap.

The top floor of the judges’ chamber that was hit by a fire incident eight months ago remains in disrepair.

In a quick response to the issue, the Judicial Service said "quotations have been evaluated for the selection of a contractor" and it is now "on the verge of signing an agreement with the successful contractor on Monday, October 10."

The successful contractor would then be introduced to the site for work to begin.

However, the situation persists on Tuesday as rainfall in the Ashanti Regional capital has once again delayed justice delivery.

A frustrated man who had a case pending in court who spoke to Joy New's Ashanti Regional correspondent, Erastus Asare Donkor said a lot of money paid as filing fees by aspiring parliamentary candidates has been taken to Accra, imploring authorities in charge to renovate to the court.

He says Kumasi deserves a court which is comparable the standard of the ones in Accra.

According to him, it is disgracing, to say the least, that a 21st-century court in Ghana would be in such a state adding it would drive away investors who have issues to settle in court.

“I hope that the Chief Justice and the relevant agencies will look at what is happening now and take a decision," he said.