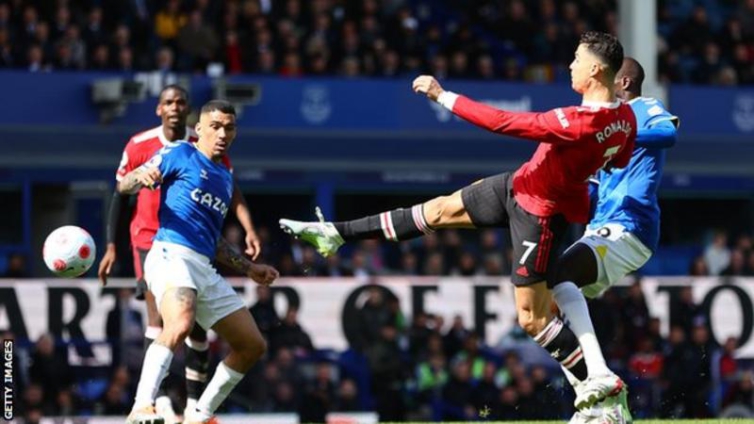 Ralf Rangnick said Manchester United “do not deserve” to play in the Champions League next season if they perform how they did against Everton for the rest of the season.

United lost 1-0 at Goodison Park despite Everton going into the game just a point above the relegation zone.

It has harmed United’s chances of finishing in the top four and securing Champions League qualification.

“If we play like we did here we just don’t deserve it,” said Rangnick.

“The players themselves should be eager to play international football, if possible Champions League. In order to qualify for Europe you have to be able to score in 95 minutes in a game like this.”

Everton came into the match following a disappointing 3-2 defeat by relegation rivals Burnley, who sit just one place below them in the table.

Rangnick bemoaned his side’s lack of ability to score against Everton, who he believed were low on confidence following that loss to Burnley.

“With all respect to Everton – because they have a good team – but if you don’t score against a team who conceded three goals against Burnley, you cannot expect to get anything out of it,” he added.

“The first 25 minutes we were in full control of the game. We didn’t even in those 25 minutes take enough advantage out of that dominating period.

“You could literally feel that Everton were crumbling after that result against Burnley. They were quite logically not full of confidence but we didn’t take advantage of that.”

Earlier this week, United edged closer to appointing Ajax boss Erik ten Hag as their new manager at the end of the season.

They have taken several months over the recruitment process, but interim boss Rangnick said the uncertainty over the managerial situation was no excuse for their underwhelming performances.

United have won just eight of the 17 Premier League games Rangnick has overseen – the lowest win percentage (47%) of any manager for the club in the competition.

“I don’t think this should be an excuse,” Rangnick told BT Sport. “We are Manchester United. We have lots of international players. There shouldn’t be an alibi.

“There will be a new manager next season. If this is announced now or in 10 days it shouldn’t have an impact.”

‘We are not good enough’

United have won just once in their past five Premier League games to slip adrift of the top four in seventh.

“We’re not good enough, for sure. It’s going to be very difficult now to be in the top four,” said De Gea.

“We don’t score, we don’t even create proper chances to score.”

The Spain keeper also criticised United’s lack of hunger to fight for the points, contrasting it with the Toffees’ tenacious display.

“We knew before today Everton were struggling and how difficult it was going to be – they were tired, they were nervous, but they keep going and keep fighting,” the 31-year-old told BT Sport.

“They had more desire than us, which is not acceptable. It’s very sad to lose today.”