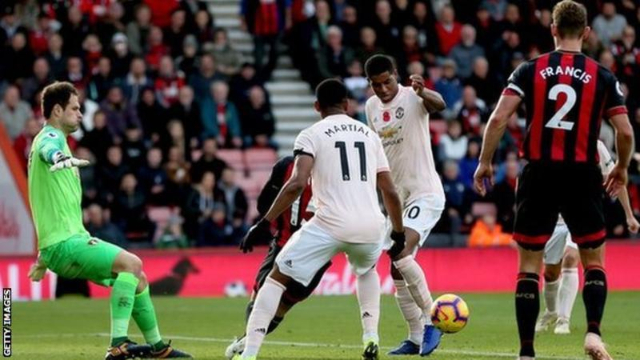 The England striker snatched all three points for the Red Devils by netting at the second attempt following Paul Pogba's cross.

United had been fortunate to be level at the interval after a lacklustre first-half display.

The Cherries had come close three times inside the first 10 minutes before a corner was half-cleared to Lewis Cook. The young England midfielder played a superb through pass to Junior Stanislas, whose pinpoint right-wing cross was stabbed in by Callum Wilson.

And the visitors were lucky not to be further behind by the time Ashley Young burst down the right and played in Alexis Sanchez, who cut it back for Anthony Martial to guide home.

United improved after the break, and nearly took the lead when Young rattled the frame of the goal with a free-kick. Rashford's goal-bound follow-up was cleared off the line by Nathan Ake, before David Brooks hacked Pogba's effort clear.

Goalline technology showed Rashford's effort did not cross the line

But Rashford eventually found a way through – and victory will lift United boss Jose Mourinho at the start of a week during which his side have two more away trips – to Juventus in the Champions League on Wednesday, and Manchester City next Sunday.