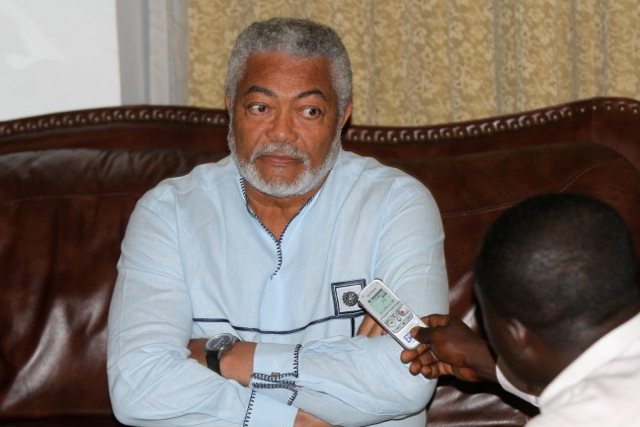 Former president Jerry John Rawlings has expressed concern about the “lightheaded” manner religious, social and political matters are portrayed by sections of the media.

He said the practice has contributed to dehumanize and make Ghanaians superficial. “We are doing too much politics with the truth,” he stated.

“Some of us have very little understanding into human nature or into the power of God and yet we want to propagate issues to do with God and godliness and we are reducing the substance and spiritual essence in our humanity,” the former president said at a meeting with the leadership of the Afrikania Mission in Accra on Tuesday.

The former president described as a perpetuation of decay, the situation where the media highlight shallow discourse on religion, politics and social issues, especially on radio and television.

“For the average mind once the TV or radio station carries it then it’s okay. The lightheadedness of what we see or what we hear is degrading us.”

The former president also took a swipe at the NDC for re-invigorating the class structure.

The PNDC, the former President said, was an expression of the will of the people.

“As the Head of State and leader I was not unaware of the aspirations and sensibilities of our people. When somebody wants to replace our culture with another then it better be good and better than what we have but in the name of freedom of worship and expression all manner of foolish things are allowed.”

Mr Rawlings recalled that in 1979 having read an article by Bishop Sarpong recognizing the value of libation, he invited him to join the AFRC. He said he was impressed that an orthodox Catholic priest could recognize the value of libation but the Catholic hierarchy at the time declined the request.

“We should show a little more sense, a little more responsibility when it comes to our relationship with God. What is important is that religion must show a sense of compassion, love and respect for one another. But to take a position that disrespects issues to do with our ancestors is not good enough,” the former President said.

Earlier the Afrikania Mission, led by its Head of Mission, Osofo Komfo Atsu Kove had expressed disquiet about the relegation of African traditional religion at the national level. They bemoaned the refusal of government to allow the pouring of libation at national events and said it was a clear manifestation of the authorities’ lack of reverence for our ancestors.

The Mission said despite several entreaties to resume the pouring of libation at national events because it is our culture, government has for the past eight years turned a deaf ear. Government’s action is provocative and tacitly endorses the attack on traditional shrines and icons by adherents of imported religion, the Mission stated.

The Afrikania Mission said it was unfortunate that at a time when questions are being raised about the lack of recognition of certain religious practices in schools, African traditional religion is described as pagan, idol worship and backward in textbooks.

The group said it was imperative that we sowed seeds of religious tolerance while respecting the right of adherents of African traditional religion to practice their culture.