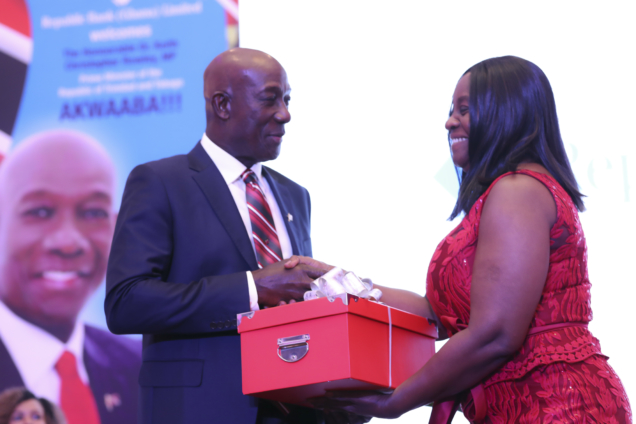 Republic Bank has hosted a dinner in honour of the Prime Minister of Trinidad and Tobago during his working visit to Ghana.

The Managing Director of the Bank, Farid Antar, in his address, said the event was to appreciate the PM for his continuous support and commitment to nurturing the bond between the Caribbean and Africa specifically, between Trinidad and Tobago and Ghana.

He, therefore, assured the Trinidad and Tobago government that the Bank will support the business and cultural opportunities between the two countries and regions.

“For us at Republic Bank, we are in a unique position as the Bank with a high presence in both the Caribbean and Ghana to facilitate that Agenda. We assure you, Prime Minister that we will promote this agenda” the Managing Director added.

Speaking at the event, the Chairman of the Board of Directors of the bank, Charles Zwennes, recognised the efforts made by the Ghana government to strengthen the relationship with Diaspora Countries and people.

“I believe that Diasporans have a lot to offer Ghana and Africa as a whole and vice versa. The success of the Year of Return Initiative by the Government of Ghana provides us yet another opportunity to consider and re-focus our resources to building stronger ties with diaspora countries especially the Caribbean regions.”

He further reaffirmed Republic Bank’s preparedness to play a significant role in the continued development of Ghana and being a conduit for development between the Caribbean and the Motherland.

“From recent and ongoing discussions and announcements it is clear that there is a renewed energy and commitment from both sides of the Atlantic to make tangible and timely progress. We at Republic Bank stand ready to play our part,” Mr Zwennes said.

The PM of Trinidad and Tobago, Dr Keith Christopher Rowley, thanked the management of the Bank in Ghana for the kind gesture and assured his government’s continued support to the Bank’s operation and expansion program in Africa.

According to him, Republic Bank in Africa symbolises: “the labour of our forefathers who were shipped to the Caribbean in slavery, bearing fruit and returning home to Africa”.

Therefore, the success of Republic Bank in Africa is an achievement of the Caribbean and all descendants of Africa in the Diaspora.

The Prime Minister also used the occasion to reaffirm his commitment to building a stronger relationship with Africa and to institute a direct flight between Ghana and the Caribbean.

The Finance Minister, Ken Ofori-Atta who represented President Nana Akufo-Addo assured those present of government’s willingness to support any initiative that will promote the bond and relationship between the Caribbean Region and Ghana.