Robbers make away with over ¢100k in alleged bullion van attack - MyJoyOnline.com

Robbers make away with over ¢100k in alleged bullion van attack 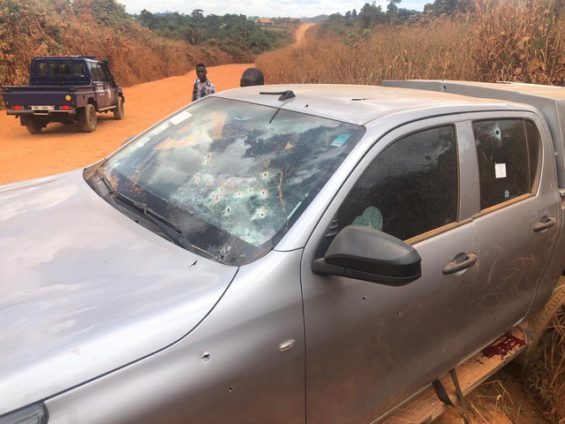 File photo of one of the bullion vans attacked recently

Another bullion van has allegedly been attacked and its content robbed by two armed men amidst sporadic shooting on Monday in Tarkwa in the Western Region.

According to the state-owned newspaper Daily Graphic, over ¢107,000 being carried on the bullion van, was robbed in front of a supermarket in the centre of town.

Eyewitnesses said the robbers trailed the van a few minutes after it had arrived at the Ransbet Super Shopping Market at about 9 a.m. to collect the weekend sales to the bank.

One of the robbers was said to have disguised himself as a shopper with a gun on him.

The Western Regional Police Command, which confirmed the incident said investigations are ongoing.

Mabel Dzedu, Manager of the Supermarket, said the van arrived at the supermarket premises without a police escort.

“The robber first entered the cosmetic shop and walked around for a while and then picked a drink and other items, paid for the items at the counter and waited for the items to be bagged,” she said.

The robber snatched the money and walked away to sit on the motorbike, which had the other robber in charge, and sped off.

Dzedu said they had a contract with Mon-Trans to carry money from the shop to the bank daily.

“When the bankers arrived, the team went through the process of counting the sales, and after the transaction was completed, they carried the money towards the waiting bullion van,” she noted.

4 bullion vans attacked in the first half of 2021

The first half of 2021 has recorded four bullion van attacks.

JoyNews checks reveal that the robbers bolted away with the cash on board the vehicles in three of the incidents.

In two of the cases, the police officers escorting the van lost their lives.