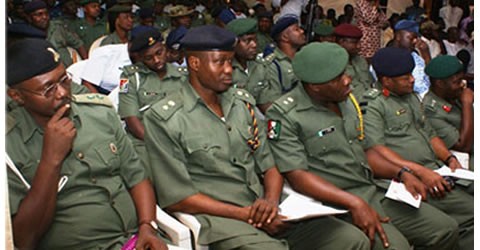 The Nigerian Navy, over the weekend, arrested a Russian ship over alleged arms smuggling.

The vessel, Myre Seadiver, said to belong to a Russian conglomerate, Moran Security Group, was detained in Lagos after a cache of weapon, including 14 Kalashnikov AK-47 assault rifles with about 5,000 rounds of ammunition, was discovered on board.

The ship was immediately moved to nearby Naval base while her 15 crew members remained on board to wait for further developments on the matter.

But the ship owner said in reaction to the arrest, at the weekend, that the ship has all necessary documents to travel within the Nigerian territorial waters.

“We have not received any official explanation for the detention,” Deputy General Director of Moran Security Group, Vadim Gusev, told RIA Novosti, adding that “Apparently, the Nigerian authorities cannot find a reason.”

The Myre Seadiver is an auxiliary vessel used to support maritime oil extraction and transport operations.

According to Gusev, the vessel has stopped in Lagos for supply and repairs between missions in the Indian Ocean and the Gulf of Guinea.

The ship, he said carried an arsenal of weaponry to ensure protection from pirates who frequently attack ships along the Nigerian coast.

“We have submitted the list of all weaponry, ammunition, and people on board to Nigerian authorities through our ship agent at the port,” Gusev said, adding that copies of all documentation have been sent to the Russian Foreign Ministry.

The official said the vessel had been authorized to make a port call in Lagos three weeks before the arrival. However, two days prior to the planned departure the Nigerian authorities seized the ship, claiming that it was staying in Nigerian waters illegally.

Although that claim was later withdrawn, the vessel has not been allowed to leave the naval base near Lagos, the company official said.