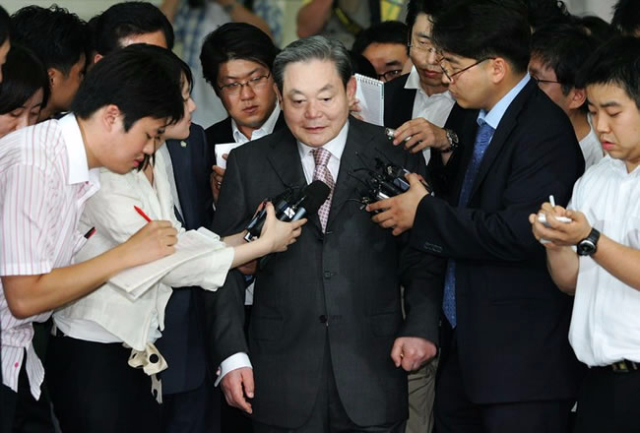 Barely two months after its crown prince was sent to prison on corruption charges, the family that controls Samsung’s vast business empire is again facing allegations of white-collar crime.

The South Korean police raided the head office of Samsung’s construction arm on Wednesday as they investigated whether Lee Kun-hee, the group’s patriarch, had misappropriated company funds to renovate his family’s home. Investigators will soon begin questioning others, including company officials, an officer involved with the investigation said.

The construction arm, a unit inside the Samsung C&T Corporation, said on Wednesday that it could not comment on a continuing police inquiry. It had previously disputed the allegations. The police officer, who asked not to be identified because he was not authorized to speak publicly, declined to disclose how much money investigators believe may have been involved.

The investigation follows the conviction in August of Mr. Lee’s son, Lee Jae-yong, 49, who is vice chairman of Samsung Electronics, the most profitable arm of the company. The younger Mr. Lee was sentenced to five years in prison for bribery. He has appealed the conviction.

The raid on Wednesday and the investigation behind it added to the uncertainty surrounding Samsung, South Korea’s biggest company and a global name in electronics and other industries. Samsung’s myriad businesses, which range from smartphones and memory chips to drugs and insurance, appeared to be running without major hiccups in recent months.

But the legal troubles of the family behind Samsung have renewed concerns in South Korea about the fate of the conglomerate, a major economic force in the country. The scrutiny also reflects public frustration with years of criminal charges leveled against the leaders of Samsung and some other big family-run companies that have led to light sentences and even to official pardons.

Lawmakers have also turned up the pressure. This week, Park Yong-jin, a member of South Korea’s governing Democratic Party and a vocal critic of the country’s corporate culture, dragged one of Lee Kun-hee’s two earlier convictions back into the limelight when he said that financial authorities had allowed the Samsung executive to inherit billions of dollars from his father without paying taxes.

South Korea would have reaped about $2 billion from the transaction, “if tax authorities had followed the rules and levied inheritance taxes,” Mr. Park said.

The criticism put the spotlight on one of Samsung’s most embarrassing episodes.

In 2008, prosecutors found 4.5 trillion South Korean won, or roughly $4.5 billion at the time, in assets that belonged to Lee Kun-hee but were divided up in more than 1,000 accounts under his lieutenants’ names. Prosecutors alleged that Lee Kun-hee had inherited the money from his father, Lee Byung-chull, Samsung’s founder, and that it had been structured to avoid taxes.

Lee Kun-hee was convicted in 2008, but South Korea’s president at the time, Lee Myung-bak, pardoned him the following year. It was the second time Lee Kun-hee had been given a presidential reprieve: He was also pardoned in 1997, a year after a conviction on bribery charges.

In a statement on Wednesday, Samsung said, without specifying amounts, that Mr. Lee had paid all the taxes that he promised to reimburse in 2008.

“The principle remains completely unchanged that the money will be used for a good cause,” the statement said.

Lee Kun-hee, 75, has been incapacitated since a heart attack in 2014. Many South Koreans still express admiration for the industrialist because of his transformation of Samsung from a local manufacturer of cheap goods into a global behemoth.

Samsung C&T, one of the conglomerate’s biggest units, has a portfolio including major power plants and suspension bridges, as well as the Burj Khalifa in Dubai, the world’s tallest building.

Lee Kun-hee reportedly owns the five most expensive houses in Seoul, the South Korean capital, all valued at more than $10 million. His main residence in the area of Itaewon, a coveted address occupied by ambassadors and the country’s wealthiest families, is worth around $20 million, according to official city data.