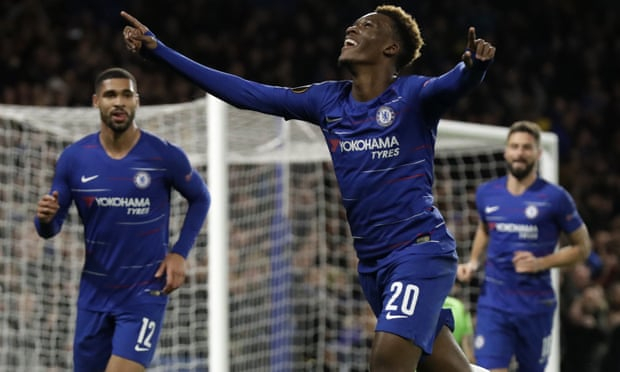 Chelsea winger Callum Hudson-Odoi should not leave the club because he has a "very great future" in England, says boss Maurizio Sarri.

The 18-year-old provided both goals for Alvaro Morata in Chelsea's FA Cup third round victory over Nottingham Forest at Stamford Bridge on Saturday.

"To stay here is better for him," said Sarri.

"He is very young but he is improving, especially in the defensive phase.

"I don't know the situation with the club but for me he is an important player."

Sarri said he did not think a move to Germany would help Hudson-Odoi because "he is an England player" and has a "very great future here with the national team and with Chelsea".

He added: "But I am not in charge of all these questions and I don't want to speak to a player about something that doesn't depend on me."

The Italian also said that Hudson-Odoi being a product of the academy was important for Chelsea, who have reportedly rejected a £20m offer for the teenager.

"We are lucky because our academy is very good. It is important because if you have five or six players from the academy you can have a soul, more than 25 foreign players," he said.

Sarri said Hudson-Odoi is now ready to compete for a starting spot with the likes of Willian and Pedro.

"We have very important players in the same position, sometimes he will be on the bench – as Willian, as Pedro – but now I can start to consider him at the same level," the Chelsea manager said.

Hudson-Odoi is the son of former Hearts of Oak Ghanaian midfielder Bismark Odoi which makes him eligible to play for the senior national team, Black Stars, despite representing England at every age group from under-16 to under-19 level.

He was an influential figure as England won the Fifa U-17 World Cup in 2017.