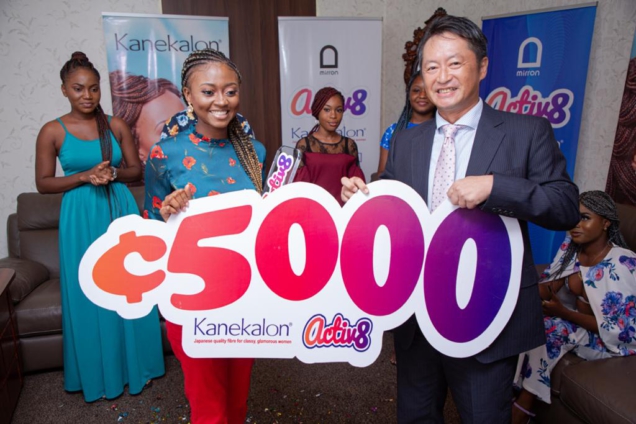 Kanekalon producers of hair fibreextensions, wigs and braids for women, has organised a competition to celebrate and empower ladies into developing their creative abilities on social media.

The four week long competition called the ‘Activ8 Challenge’ which took a virtual turn for its maiden edition began with 40 smart ladies, ended with five finalist and one emerging winner.

The competition which began with the month of April was climaxed on the company’s Instagram live stream on Sunday at the head office of Kanekalon in Accra.

The competition which is the one of a kind, gained a lot of attention on social media as lots of people showed support for their friends by sharing their posts, commenting and through the online voting system created by the team.

Kanekalon came up with this initiative to empower young ladies to use their time on social media more productively and to be play with their creativity.

With a new task given every week, the ladies were challenged to be at their best in order to stay in the competition.

Serwaa Appiah who emerged as the ultimate winner went home with a cash prize of ¢¢5000 took to her social media page to celebrate her victory by thanking all who voted and supported her.

The first runner-up, Angela who was popularly addressed as ‘French Bae’ won for herself a cash prize of ¢2000 and a package comprising of hair products from the brand.

The second runner-up, Nervissah also got a cash prize of ¢1000 and some gifts from Kanekalon.

Hiro Seko, the General Manager of the Kanekalon Africa, who was present at the event on Sunday was elated with the turnout of events.

He congratulated the ladies on their success while presenting their awards to them.

Mr Seko wished to see more great content and works from them and encouraged them to join the newly created official team of social media content creators for the brand.