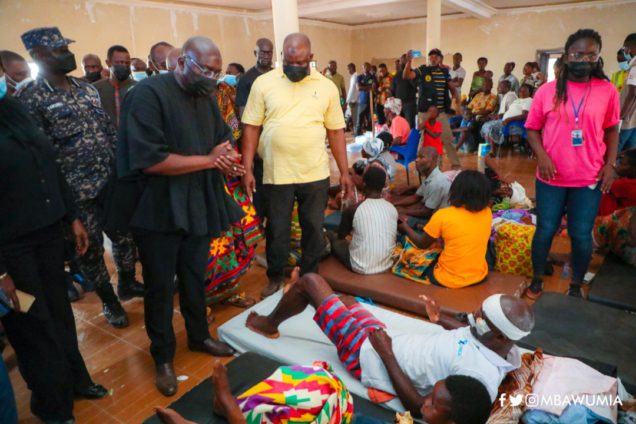 The General Secretary of the Ghana Medical Association (GMA), Titus Beyuo has called for the establishment of a pharmacy for the victims of Apeatse explosion at the emergency camps.

Speaking in an interview on Joy FM’s Midday News on Friday, he bemoaned the situation whereby patients are issued prescriptions and asked to go in search of the drugs to buy.

He further noted that besides providing the on-site pharmacy, patients should be given access to the drugs without any charges.

“An on-site pharmacy must be set up immediately. People should not be given prescriptions to go look for medications to buy because within that town, the whole place is destroyed. Are they supposed to travel to the next community to go and look for a drug to go and buy and these are people who have lost their livelihoods, so it would be unfortunate that a victim would be given a prescription to go and look for medication,” he said.

His comment comes after some victims of last week Thursday’s explosion in Apeatse are reported to be experiencing mild to moderate hearing loss, according to a retired Ear, Nose and Throat surgeon, Dr. Paul Kwaw Ntodi.

The former Medical Director of the Effia Nkwanta Regional Hospital who is part of a team engaged in a medical screening of the affected persons says some of them now have ear infections.

He said the ear infection is as a result of the victims being unable to access the needed medication which have prescribed.

Responding to the issue at hand, he said due to the loud nature of the explosion experienced, ear problems and things of that nature are expected.

“What is unfortunate is the fact that we did hear the doctor saying that people are not getting antibiotics and therefore it is getting infected…. That calls for emergency response in this regard,” he added.

He, therefore, urged the response team allocated to the emergency camps to be swift in providing the adequate medication and antibiotics needed to prevent further complications.

“Indeed, it can get worse because if you take like the infection, normally if an eardrum is treated, it can heal continuously on its own without the need for any surgical intervention, but if it gets infected, then there are complications that even make the situation even worse. You can get people developing other infections that can spread all the way to the brain. So the provision of antibiotics for these patients is an emergency,” he said.