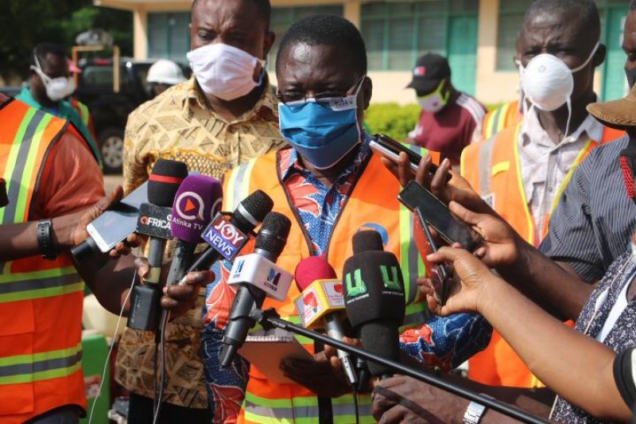 The Technical Committee of the Shama District Assembly has taken a firm decision to ban the activities of illegal clay mining in the District.

A task force has thus, been set up by the assembly to combat the operations of illegal clay miners.

Joseph Amoah, the District Chief Executive (DCE) and Head of the Technical Committee who made this known, explained that illegal clay mining has destroyed the once arable land of the area, reducing it somewhat to an infertile ground.

Moreover, those interested in engaging in clay mining must acquire the necessary licenses and permit to do so.

Dr Henry Kwabena Kokofu, Executive Director of Environmental Protection Agency (EPA), in his recent visit to the district expressed concern about the deplorable nature of the arable lands in the area mainly due to the activities of illegal clay mining.

He mentioned that people had either glossed over it or not given the attention to activities of illegal clay mining because they believed it was only illegal gold mining that could devastate the land.

Dr Kokofu, however, stressed that clay mining was equally inimical to the lives and property of residents around areas the illegal mining activities occurred.

David Yevugah, Human Resource Manager of Twyford Ceramic Company admitted that demand for clay in the manufacturing of tiles by the company had increased, but indicated that the company did not buy from illegal clay miners.

Some of the illegal clay miners blamed the EPA and the Minerals Commission for their inability to secure the required licenses and permit, saying there were too many bottlenecks and delays in the process.

They therefore appealed to officials of the EPA and the Minerals Commission to make it easier for them to acquire the required license.

Kojo Mensah, Programmes Officer of EPA refuted the claim by the illegal clay miners and explained that many of them failed to provide relevant documents that could guarantee the swift process of their permit.

The Assemblymember for Supormu Dunkwa-Beposo electoral area, Mr Isaac Adane Boakye whose community was deeply affected welcomed the timely decision of the authorities concerned to place an indefinite ban on the illegal clay mining.

Mr Boakye pledged his support and assured that every measure would be considered, including; the formation of watchdog committees to check the illegal activity.

DISCLAIMER: The Views, Comments, Opinions, Contributions and Statements made by Readers and Contributors on this platform do not necessarily represent the views or policy of Multimedia Group Limited.
Tags:
Illegal Clay Mining
Shama