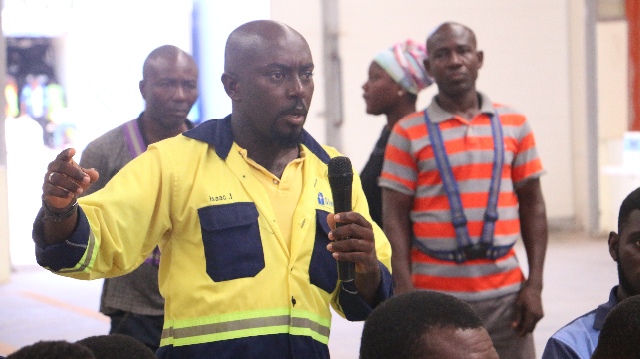 The Chief Executive Officer of the Ghana Shippers Authority has said Ghana’s quest to becoming the preferred transit country and consequently become the gateway to the West African Sub Region, requires an all-hands-on-deck approach which will ensure that stakeholders in the sector play their respective roles effectively.

Madam Benonita Bismarck said this will ensure that stakeholders also contribute their quota to finding lasting solutions to the myriad of challenges affecting the growth of the transit Trade in Ghana.

She was speaking at the maiden sensitization workshop for Haulage Truck Drivers held at the Takoradi Container Term in the Western Region.

“As critical stakeholders in the transport logistics chain, no effort should be spared in ensuring that Truck Drivers are regularly sanitized and fully equipped on the international conventions, national / regions, directives and measures that relate directly to your operations to engender full compliance.”

Head of Freight and Logistics at the Ghana Shippers Authority Fred Asiedu –Dartey speaking at the sidelines of the workshop, said the expectation of the Authority for a smooth transport system has not been met as haulage truck drivers are constantly frustrated on the road.

“On the road between Tema and Paga, we are counting 64 barriers. What this means is that if a truck driver is going to Ouagadougou, he would have to stop 64 times and at each point, there would be a security operative either asking for documents or other things which delay the journey.”

He added that a quarterly fact-finding mission undertaken by their staff along major transit corridor of the country unearthed serious infractions of road traffic regulations, police harassment, malpractice at the Axle load station among others.  “extortion of money from the driver , we found out from the fact-finding mission that monies ranging from one cedi to five hundred cedis is collected from the drivers at each of the points,”  he added.