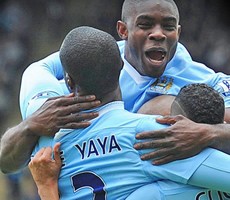 The Spanish international doubled his tally for the season with a brace — his first home goals since scoring in the 6-3 rout of Arsenal on December 14 last year — and Yaya Toure added a late third.

The defending champions were forced to go into the game without a recognised striker and with versatile utility man James Milner pressed into action as an emergency centre-forward.

Injuries to Sergio Aguero, Edin Dzeko and Stevan Jovetic and an illness affecting young reserve Jose Angel Pozo left City manager Manuel Pellegrini in a predicament, and the absence of a predatory front man was keenly felt in the first half.

City pieced together a number of enterprising moves, but with Palace well drilled and committed, too often they found at least 10 visiting players blocking their path to goal.