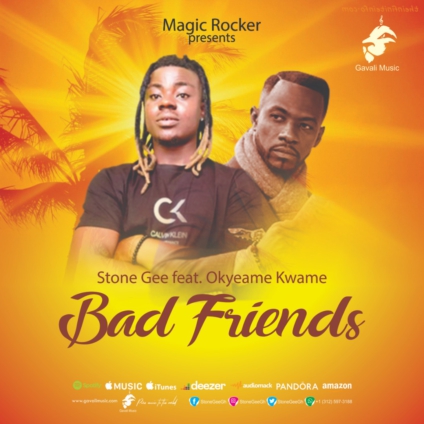 The single comes after the release of two hit singles titled ‘Jealousy and Bottom Power’ and serves as a prelude to his compilation album, which is expected to be out next year.

The yet-to-be-released song, produced by Gavali Music and mixed by Mr Sarge, is the third single released this year to entertain Ghanaian music fans.

‘Bad Friends’, which has been equipped with good highlife rhythms and godly-inspired lyrics, promises to rule party joints around the country.

Stone Gee said in a chat that he was happy that his previous two singles released a couple of months ago has caught the attention of a large number of music lovers who are currently waiting to grab copies of his album to be released next year.

The song is expected to enjoy huge downloads on various digital music platforms such as Amazon, YouTube, iTunes, among others, after it has been released.

Stone Gee’s dedication to artistic innovation has resulted in record-breaking recognition in the country, with a list of esteemed accolades, including many awards.

He confirmed reports that he was working with some of the known faces in the industry but wanted to keep the names under wraps for now.

“Surely, I have a couple of the known names on my project, but I want to hide their names for now. My name may be fresh in the industry, but I have remained underground for some years now, and this has indeed strengthened me,” he said.

The Gavali Music signee is looking forward to breaking into the Ghanaian music scene with his ‘Bad Friends’ single, followed by other hit singles by the year’s close.

With his unique rap style, the ‘Bottom Power’ hitmaker is expected to cause a lot of stir in the Ghanaian music scene in the coming weeks.

Stone Gee was discovered a few years ago by Gavali Music, owned by renowned music producer, artiste manager and entrepreneur, Richard Essien, known in the music scene as Magic Rocker.

Stone won the ‘Artiste of the Year’ award at the 2020 edition of the annual Eastern Music Awards (EMA).

In a chat, the CEO of Gavali Music, Magic Rocker, said the artiste has come to stay, adding that the new single would definitely get fans dancing just like his other hits.