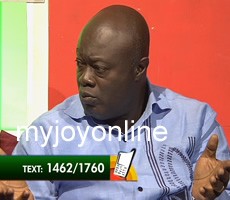 Former boss for Kumasi Metropolitan Assembly is insisting the telephone records and bank details of the nine Supreme Court judges who heard an Election Petition to be looked into as the integrity of the judiciary has been questioned.

Maxwell Kofi Jumah said the committee set up by the Chief Justice  to look into claims of former Deputy Communicaions Minister, Victoria Hammah, on a leaked tape should request three weeks of calls made by the judges before they delievered the judgment on the 2012 Presidential Election Petition.

The Chief Justice, Mrs Justice Georgina Theodora Wood, constituted the committee last Thursday to investigate the allegations by Ms Victoria Hammah regarding the integrity of the Judiciary.

Ms Hammah had stated in the secretly recorded tape that the Minister of Gender and Social Protection, Nana Oye Lithur, might have influenced the outcome of the landmark election petition which had gone in favour of the ruling party.

The committee has been necessitated by a petition sent to the Chief Justice by the New Patriotic Party (NPP) to launch a full-scale investigation into Ms Hammah’s claim.

An out-spoken Maxwell Kofi Jumah fears the hearing of the committee which is expected to last 14 days is too short and that "they [committee members] will be forced to do a rush job given the seriousness of the allegations".

According to the former MP for Asokwa, there is also the need to bring in foreign experts to help in the investigations because left alone to officials and judges in the judiciary, the process could be compromised through bribery.

He did not state exactly which area of expertise would require the help of foreigners but strongly advocates  that this will help clear the judiciary of street wide concerns he has picked from drinking bars that the judiciary was corrupt.