Sustenance of the country's peace is a shared responsibility - Akufo-Addo - MyJoyOnline.com 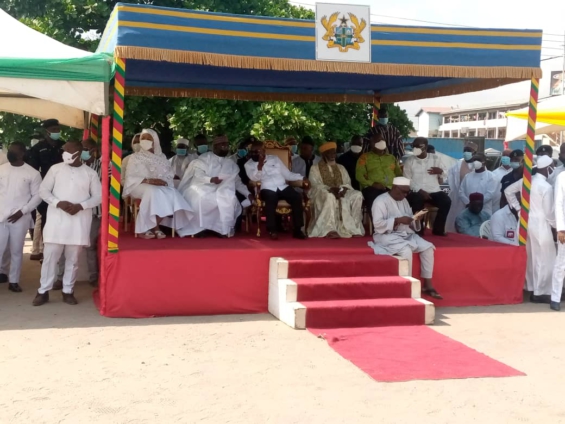 President Akufo-Addo says the sustenance of the country’s peace is a shared responsibility for all Ghanaians and has therefore entreated citizens to play their part in keeping the country united even after a fiercely contested election.

The President’s comment comes after pockets of violent clashes and vandalism by some elements who feel aggrieved following the declaration of the election results by the chairperson of the Electoral Commission led to a few deaths across the country.

Addressing the Muslim community at a thanksgiving service at the Central Mosque in Accra Friday, President Akufo-Addo expressed hope that the Ghanaian people will find a way to come together as one people.

“I’m confident that the good sense of the Ghanaian people will make sure that the peace and stability of our nation which is the envy of many countries around the world and on our continent will continue to be so.”

He also commended the National Chief Imam, whom he had called on to intercede prior to the elections, for his peacebuilding effort and urged him to continue to pray for the nation.

“I want to thank the Chief Imam particularly, for all that he’s been doing to maintain the peace of our nation and also to let the Ghanaian people know that everything that we do has to be to the glory of Almighty God. Imam, the nation continues to be grateful to you for your ministry and for your contribution to the development of our nation. All of us are grateful,” he said.

Akufo-Addo was appreciative of the Chief Imam’s prayer and support throughout the electioneering process. According to him, God had answered the prayers of the Chief Imam and granted him a second term in office.

“We came to the National Chief Imam to ask him to intercede with the Almighty God for doing 3 things for us. The first was that before, during and after the elections of 7th December that he should grant our country peace and unity.

“We also came to ask him to shower his particular blessings on the Chief Imam’s own son, Alhaji Mahumudu Bawumia; and thirdly, that he should ask the almighty God for victory for me and the NPP. The Elections have concluded and all three things that we sought from the almighty God through the intercession of the Chief Imam, the almighty has heard our prayer.

“So we have come today to say our thanks to the chief Imam and the Almighty that these things that we asked for and prayed for; the peace and unity of our nation, his blessings on his son the Vice President and now the Vice President-elect and victory in the presidential contest for me and the New Patriotic Party he has seen fit to grant each one of these prayers,” he said.

He made a pledge to renovate the Central Mosque as a thanksgiving gesture for winning the elections.

“We want to thank Allah for this day. For seeing us through this election. For all things, we give thanks to God, and the glory is His. We want to thank the Chief Imam for all his kindness and guidance throughout this process. We have nothing but to ask for peace.

“Ghana is the most peaceful country in West Africa and we want to maintain the peace, we want to maintain our unity, we are a unique country. We have Christians and Muslims in this country we unite and that is the only way we can see development,” he said.