T.T took care of some of us like his sons - George Quaye - MyJoyOnline.com

T.T took care of some of us like his sons – George Quaye 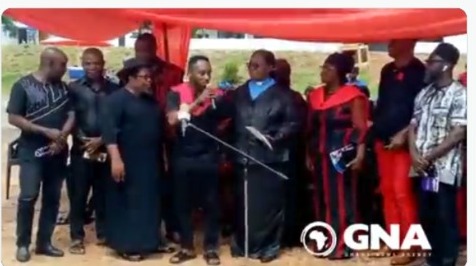 The Chief Executive of ImageBureau and host of Showbiz A to Z on Joy FM, George Nii Armah Quaye, has recounted some fond memories he shared with the late Veteran Actor, Psalm Adjeteyfio, aka T.T.

The two featured in “Taxi Driver” – a Ghanaian series shot in the late 90s.

Other cast from the TV series also graced the event.

George Quaye, while paying tribute to the late actor, recalled how T.T. used to tell stories to other members of the cast during break sessions whilst on set.

“We will thank our father, T.T because he took care of some of us as his own sons. During the shooting of Taxi driver when there is a break session, he will tell many stories and he was interesting and happy to be with,” he said.

Some cast of “Taxi Driver” – a Ghanaian series from the late 90s – pay tribute to their late colleague and friend Psalm Ajeteyfio. #GhanaNewsAgency#GNA#ripTT pic.twitter.com/y8NERRSIEn

George who acted as ‘Aboagye’ in the late 90s “Taxi Driver” TV series was one of the funniest actors and would always have issues with T.T.

The late veteran actor was laid to rest after a solemn funeral ceremony at the forecourt of the Trade Fair, La on Saturday, June 4, 2022.