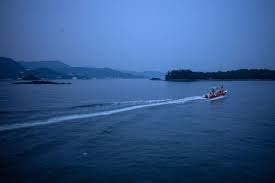 Taiwan has been holding since last month five people from Hong Kong who fled the Chinese-run city by boat and were picked up by Taiwan’s coast guard in the South China Sea, sources familiar with the situation told Reuters.

Democratic Taiwan has opened its doors to people from Hong Kong, which has been rocked by anti-government protests and where China has enforced a tough national security law. But Taiwan says anyone who enters must do so legally, even though its borders are largely closed due to coronavirus prevention steps.

Five sources told Reuters the five people held in detention by Taiwan’s coast guard had left by boat from Hong Kong and made it to the Taiwan-controlled Pratas Islands at the northern end of the South China Sea.

A Taiwan security source said they are currently at a Taiwan coast guard facility in the southern port city of Kaohsiung.

The Hong Kong Security Bureau said it had not received any information from Taiwan, nor from any family members asking for help. Police have made inquiries with the Taiwan authorities and are awaiting a reply, the bureau added.

“We call on Taiwan to take responsibility for combating cross-border crimes. If they are suspected of committing crimes in Hong Kong, they should not harbour criminals,” Security Secretary John Lee said in a statement.

Taiwan’s official Central News Agency reported late on Sunday the five “have basic rights including access to lawyers”, citing a unnamed source. It did not elaborate and Reuters was not able to independently confirm the report.

Taiwan’s government has declined to comment on the case and opposition parties have criticised the government for not doing more to help Hong Kongers fleeing political persecution.

Premier Su Tseng-chang, asked about the five, told reporters on Monday the government cared deeply about people from Hong Kong.

“As for the help to Hong Kong people, certain individual cases we cannot reveal,” he said.

Taipei Mayor Ko Wen-je’s Taiwan People’s Party said at the weekend the ruling Democratic Progressive Party needed to provide a clear explanation for the case and amend existing laws so Hong Kongers fleeing political persecution do not have to resort to using people smugglers.

Hong Kong has become another source of tension between Taipei and Beijing, whose government claims Taiwan as sovereign Chinese territory. Taiwan has shown no interest in being ruled by autocratic China.

DISCLAIMER: The Views, Comments, Opinions, Contributions and Statements made by Readers and Contributors on this platform do not necessarily represent the views or policy of Multimedia Group Limited.
Tags:
China
Hong Kong