Tariq Lamptey: Brighton’s ‘kid with no limits’ a rising star in the Premier League 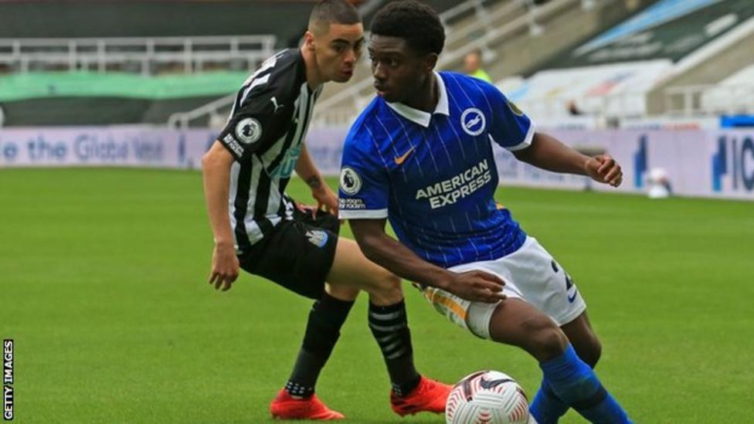 Neal Maupay may have scored two of Brighton’s three goals in Sunday’s win at Newcastle but instead of taking the praise, he was keen to direct the plaudits towards a player who is fast proving to be one of the Premier League’s most exciting talents.

“He was everywhere,” said Maupay. “This kid doesn’t have limits. He is 19 and playing at such a high level.”

For the second game in a row, the England under-21 international caught the eye with his pace and trickery. After both Brighton’s defeat by Chelsea and Sunday’s win against Newcastle, Lamptey has been selected as player of the match by BBC Sport readers.

It is an impressive rise for the Chelsea academy graduate, who was snapped up by Brighton at the start of the year and now the Seagulls are reaping the rewards as the youngster goes from strength to strength.

Strong in the tackle and a danger on the attack

Despite his young age and small stature, Lamptey is impressively strong in defence. That, coupled with his pace and skill on the ball, makes him a danger at both ends of the pitch.

His influence in attack and defence against Newcastle was evident in the stats. He made more interceptions (four) and won more fouls (four) than any other player on the pitch, despite being taken off just before the hour mark.

He tormented Allan Saint-Maximin – who fouled Lamptey to give away an early penalty – so much that Newcastle boss Steve Bruce switched his winger onto the opposite flank to give him some respite.

“He’s got such pace, he threatens the backline of the defence so well and then he does his own defensive work as well, he’s amazing,” Brighton boss Graham Potter said.

“I’ve spoken about his personality a lot – he just wants to improve and to learn. He’s so refreshing to work with.”

The one that got away for Chelsea?

Chelsea were well aware of Lamptey’s talents, with the youngster impressing on his debut for the Blues in a 2-1 win against Arsenal on 29 December 2019.

He went on to make a handful of appearances after that but, with his contract due to expire this summer, he decided to look elsewhere for more regular game time, opting to make the switch to Brighton at the start of this year.

Lamptey has not looked back, with his impressive performances beginning after the Premier League’s restart last season and continuing into the current campaign.

Against his former club last week, Lamptey provided the assist for Leandro Trossard’s goal, as well as embarking on a joint-game-high five dribbles.

His performance earned him a place in Garth Crooks’ team of the week for the first round of fixtures while his latest display prompted former Liverpool captain and Sky Sports pundit Jamie Carragher to write on Twitter that he “loved” Lamptey.

“It’s just great to get high praise from such fantastic ex-players,” said Lamptey.

“I appreciate all the praise and I’m thankful for it but I have to keep working hard and keep focusing and putting in good performances for the team.”

England’s next right-back, or destined for another country?

Lamptey’s rise comes at a perhaps unfortunate time for England, with Gareth Southgate already spoilt for choice in the right-back department – Trent Alexander-Arnold, Kieran Trippier, Aaron Wan-Bissaka, Kyle Walker and Reece James are all possible options for the position.

With Lamptey having been capped only at youth level for England he could yet decide to switch to Ghana, who he is eligible to play for through his parents.

But whatever his decision, Potter is confident it won’t be made because he doesn’t have the desire to fight off the strong competition to claim England’s right-back spot.

“He’s certainly not a person who would give up on anything,” the Brighton boss said.

“Whatever decision he makes I would fully support and try to help him achieve his goals.

DISCLAIMER: The Views, Comments, Opinions, Contributions and Statements made by Readers and Contributors on this platform do not necessarily represent the views or policy of Multimedia Group Limited.
Tags:
Brighton
Premier League
Tariq Lamptey