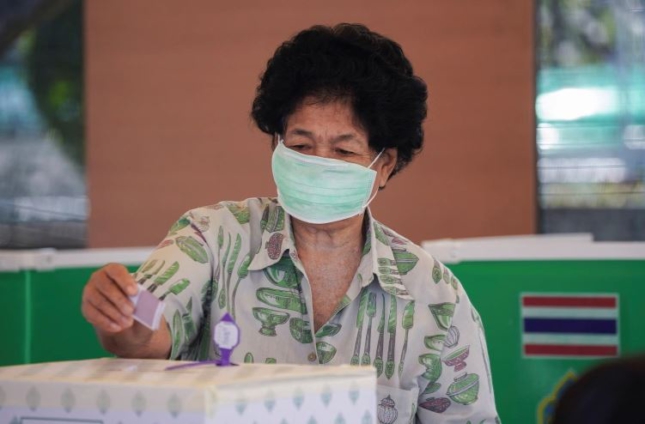 A woman casts her vote at a polling station during provincial elections in Prachuap Khiri Khan province in Thailand, December 20, 2020 [Athit Perawongmetha/ Reuters]

Voters in Thailand are casting their ballots in provincial elections, marking the first test of democracy since a general election last year that drew accusations of manipulation and helped spawn months of youth protests.

Polls close at 5pm (10:00 GMT), with results expected from the evening.

Sunday’s elections in Thailand’s 76 provinces outside the capital Bangkok are the first since Prime Minister Prayuth Chan-ocha, who kept power after last year’s ballot, overthrew an elected government in a military coup.

“It’s my duty to vote,” said 27-year-old bank worker Korkiet Akaraparn, voting in his first provincial election in Nonthaburi, on the outskirts of Bangkok. “I hope that there will be new people from this election who bring change,” he told Reuters news agency.

Among the parties putting up candidates is the Progressive Movement, which has its roots in the now-banned Future Forward Party of Thanathorn Juangroongruangkit.

Thanathorn had emerged as the most vocal challenger to Prayuth. When he and his party were banned from politics, it prompted protests demanding Prayuth’s removal, a new constitution and reforms to the powerful monarchy.

Prayuth rejects accusations that he engineered the general election to keep power.

Although the party backing him in Parliament is not formally putting up candidates in the provincial elections, contestants in races across the country are making clear their loyalty to his camp.

The Bangkok Post, in an editorial on Sunday, urged young voters to participate in Sunday’s vote.

The newspaper said many analysts anticipate a low turnout in that demographic, because young voters, “while grasping the general notion of democracy” still “struggle to understand” what provincial administrators are supposed to do.

“A recent global studies highlight time and again, Thailand is one of the most unequal societies in the world with one recent Credit Suisse report finding the richest 1 percent in Thailand now controls almost 67 per cent of the country’s wealth,” the editorial said.

“A renewed focus on Bangkok and Bangkok-based national politics is unlikely to lessen that margin and that is why the local elections today will hopefully draw a large turnout.”

Young voters who are “enthusiastic in breaking the old tradition”, the Bangkok Post said, should “turn out in force at polling stations, and make a crucial decision to bring change to local politics, the foundation of the political system.”

In Thailand, provincial administrations are responsible for the provision of local services and development plans and run their own budgets.

The Progressive Movement seeks to devolve more power to provinces from Bangkok, which is not holding its own local election yet.

The elections are also a test for the Pheu Thai Party linked to populist former Prime Minister Thaksin Shinawatra.

In opposition, it remains the largest party in Thailand’s parliament.

Thaksin, who rarely comments in public from self-exile since being overthrown in 2006, has shared posts on Twitter encouraging people to support the party ahead of provincial elections, in which powerful families traditionally hold local sway.

“I voted for candidates who are relatives of the former chief,” said Charoen Buaperm, 60.