The accident that created a world champion

Manasi Joshi had just begun a career as a software engineer when what should have been a routine commute to work ended in a tragic accident. But this moment of horror changed her life in a surprisingly positive way.

It was December 2011 and, for 22-year-old Manasi Joshi, a normal Friday morning.

She had recently graduated and just started her first job as a software engineer in the hectic Indian metropolis of Mumbai.

The house where she lived with her parents was barely 7km (4 miles) from her office, so Manasi would commute to work by motorbike.

But that Friday, barely 10 minutes into her journey, disaster struck – as she took a U-turn under a flyover, a lorry travelling in the wrong direction ran over her leg.

“I was still conscious after it happened. I managed to sit up and take my helmet off. I immediately knew my injuries were serious,” she says.

People rushed to the spot but no-one really knew what to do.

“Indians are helpful by nature but they are not very skilled, especially in emergency situations,” Manasi says with a wry smile. 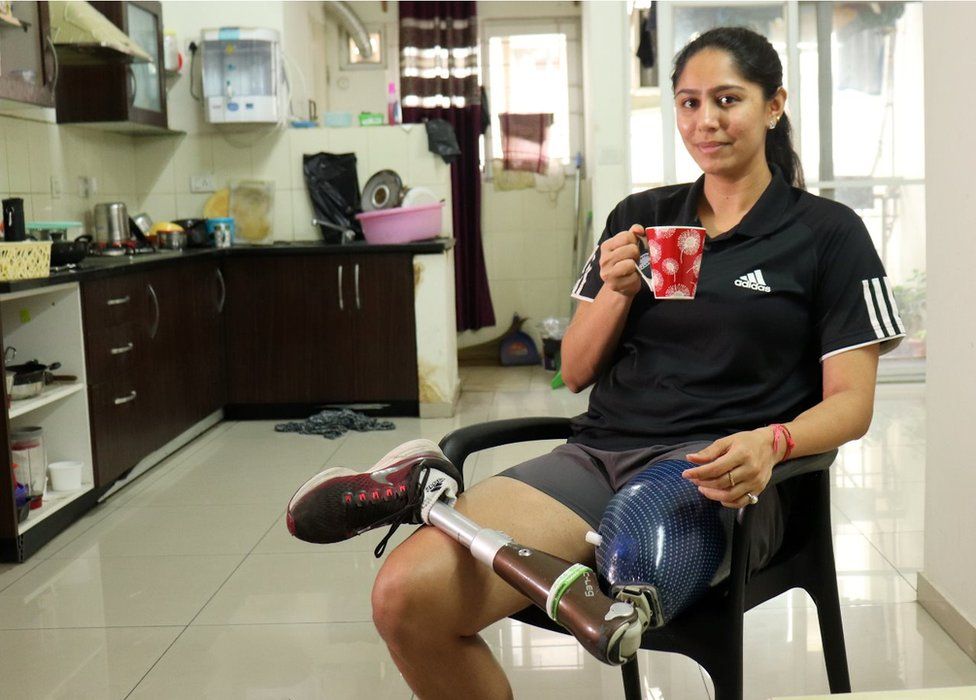 After waiting in vain for an ambulance, police lifted her on to a “rickety” stretcher and took her to a nearby hospital.

However, it was ill-equipped to deal with the injuries to one of her hands, and to her left leg – which was completely crushed. There was no surgeon, and not even an ambulance to take her to a larger hospital.

“I was so frustrated. I had lost so much blood, and I was losing time,” she says.

The hospital’s ambulance, when it arrived a full two hours later, turned out to be a dilapidated van – a far cry from the “state-of-the-art” vehicle that had been promised. Her 10-12km journey to the hospital where she would finally be treated was torturous, every bump, every pothole, only increasing her agony.

It was only at 17:30 that evening that Manasi received proper medical care – about nine hours after her accident.

Doctors made saving her leg a priority. She was in hospital for 45 days, going into surgery every five to 10 days. But eventually gangrene set in and the medical team had to concede defeat. There was no choice but to amputate her leg.

When she was growing up, studies were always the priority in the Joshi household. Manasi’s father was a government scientist at Mumbai’s prestigious Bhabha Atomic Research Centre and was determined that his children should also do well academically. That is how she ended up pursuing computer science and becoming a software engineer.

But Manasi was also one of those children who took part in all sorts of extracurricular activities.

“I played many sports like football, basketball and even volleyball. And it was not just sports. I was also exposed to music, singing, art… you know how parents want their kids to be exposed to lots of activities,” she says. 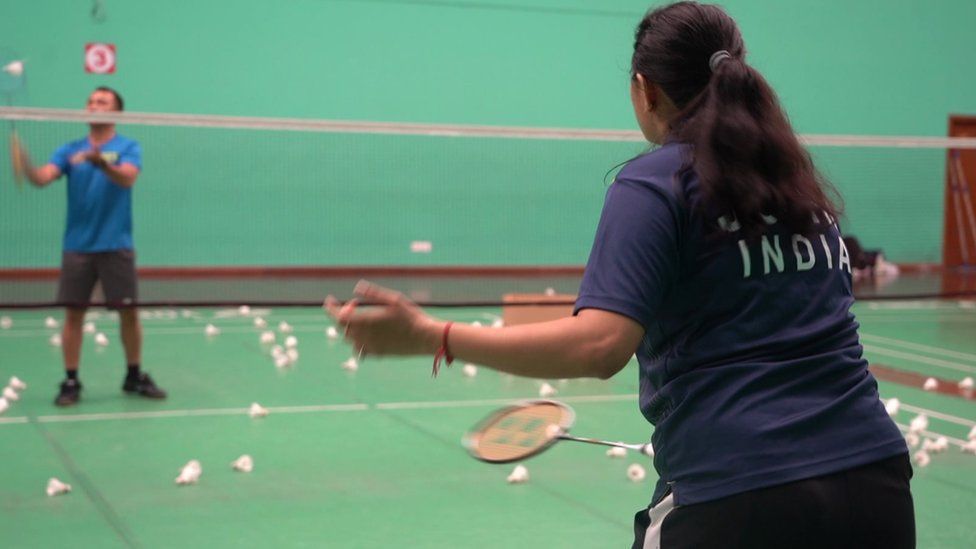 Badminton was a favourite, though. Manasi’s father was her first coach – when she was barely six, he had taught her how to hold a racket and hit a shuttle.

So after her injury, she returned to the sport as part of her rehabilitation.

In the eight years since her horrific accident, she had begun seriously pursuing para-badminton, made it on to India’s national team, and was now representing the country at the finals of the World Championships.

The final was against defending champion and fellow Indian Parul Parma. Manasi had never won a match against her. But this time, she was confident.

“I was very fit, I was very quick on court, and my hand, my strokes, everything had its own clarity,” she says.

As the match progressed, Manasi began to surge ahead of Parma, dominating the game. The last set was a decimation – she won 13 points in a row, and suddenly, seemingly just like that, she was a World Champion. 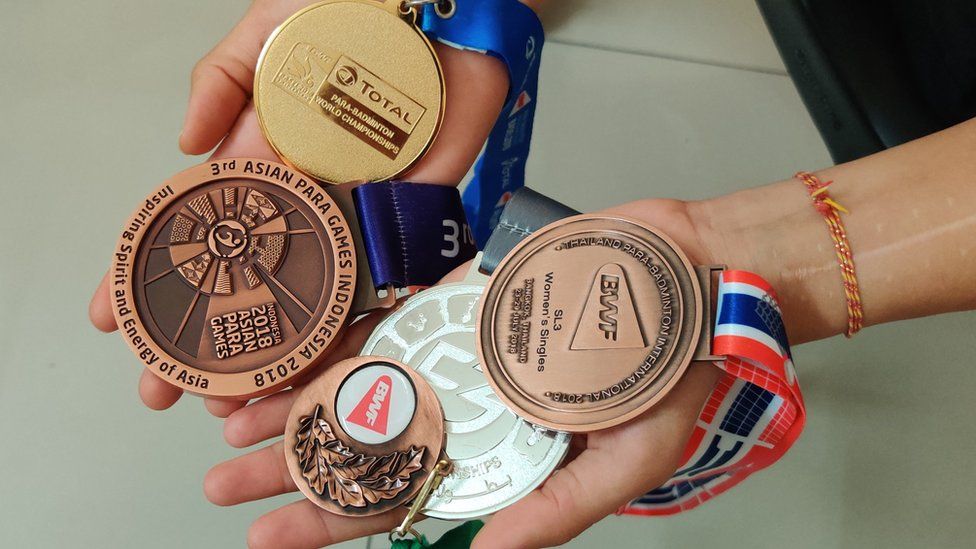 But how did she make the journey from amputee to para-athlete?

When she describes the days immediately after her accident, Manasi does not look back on them with any real bitterness. Instead, she recounts how her college friends and colleagues flocked to her bedside making her hospital room “the coolest hang-out spot”, how the intensive care nurses became her friends, and how an anaesthetist paid her a visit to boost her morale, after being touched by her plight in the operating theatre.

“Trust me, there was not even a single point where I felt something very bad has happened to me. I’ll say the worst I felt was when I came home and I looked at myself in mirror and said, ‘Oh yeah this doesn’t look good!’ But then after a few days I felt ‘It’s OK, it’s just a scar… it’s just a leg.'”

Badminton began as part of a process of rehabilitation to help her walk again with a prosthetic limb, but she began to show exceptional skill. One day she caught the eye of a fellow para-badminton player, who saw her defeat able-bodied competitors at a corporate tournament. He encouraged her to try out for the Indian team, which led eventually to her getting called up

to take part in a tournament in Spain.

Although she didn’t win, she did, for the first time, feel the “transformational power” of the sport. 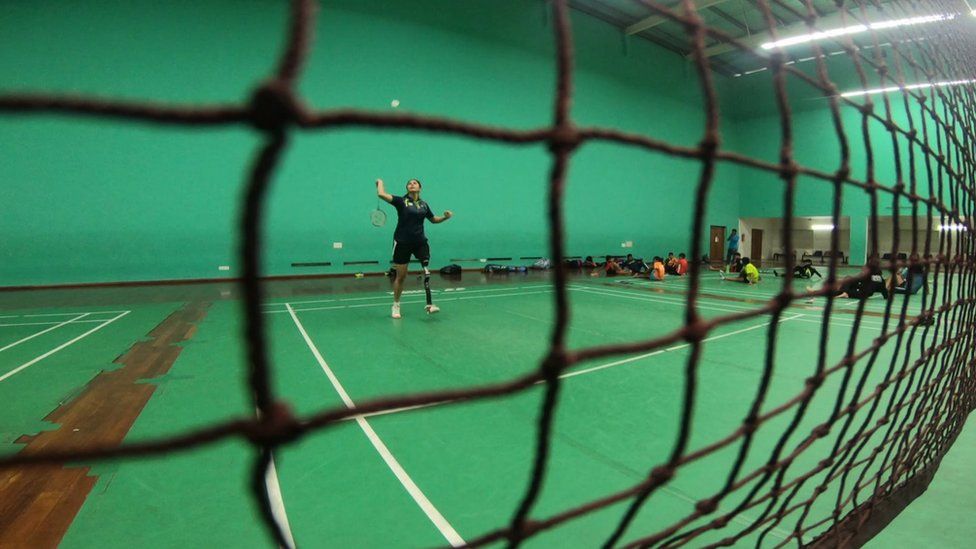 Badminton was an old friend for Manasi, but she only played it as a hobby

Here were people, some with injuries far more severe than Manasi’s, out on the court, playing what she calls “flawless” badminton.

“And they were so kind and generous. They actually came up to me and thanked me for choosing the sport! That was part of the reason I decided to take this up full-time,” she says.

It was a chance meeting with legendary Indian coach Pullela Gopichand that truly transformed her career. A former international champion, Gopichand is the man behind India’s recent dominance on the world badminton stage – he’s coach to world champions like PV Sindhu and Saina Nehwal.

She was working at a bank in the western city of Ahmedabad when Mr Gopichand paid a visit – and she went straight up to him to ask if he would train her.

Mr. Gopichand laughs when I ask him about his reaction.

“She looked like quite a brave girl, her story was very inspiring, I said, ‘OK we will look into it,'” he says.

But training a para-athlete was a new challenge. Gopichand scrutinised videos of matches, and even practised playing while limping on one leg to try and get a sense of what it was like for her. Then, along with his coaching staff, he designed a training schedule for Manasi, who he describes as “very focused and gritty”.

It was those qualities that got her to the World Championship and the pinnacle of her sport. 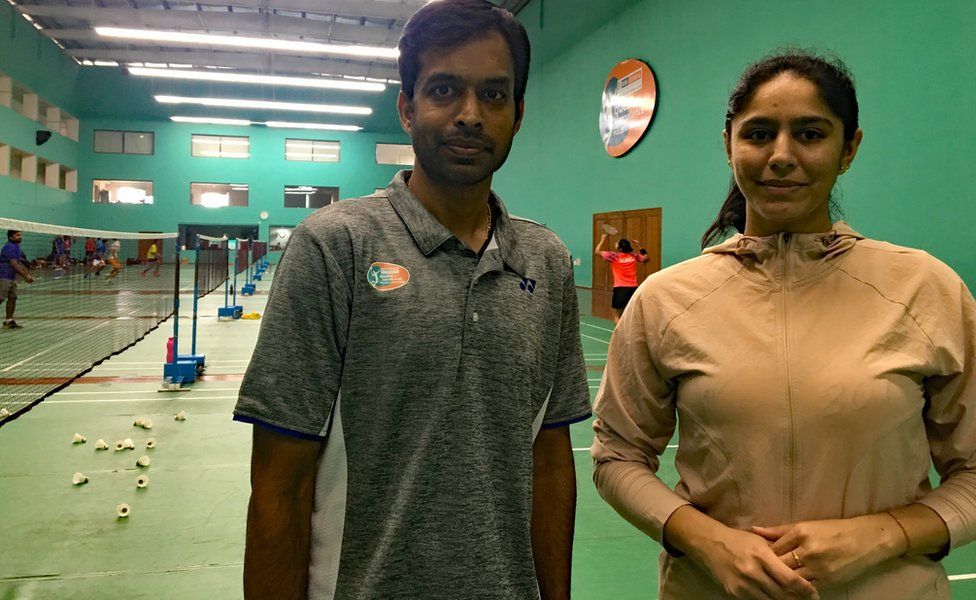 When I meet Manasi, she is in the middle of an intense training session with her coach, Hari, at the prestigious Pullela Gopichand Badminton Academy in the southern city of Hyderabad.

As I watch her play, I can tell that I am witnessing something very special.

It is not just the fact that the lithe, athletic woman on the court is wearing a prosthetic leg. She also returns a flurry of increasingly tricky shots, smashing and volleying with ease.

Afterwards, it becomes evident that Manasi’s victory in Basel has turned her into a celebrity.

“Everything has changed. People are recognising me in the streets,” she says, laughing.

I travel home with her, and as we enter her apartment complex, a young man stops his motorcycle and, with the engine still running, he hurries after her to ask for a selfie.

Her apartment is filled with mementoes and gifts she has received from fans and there are stacks of greeting cards in the hall.

She shows me a large handmade poster pasted on her bedroom door. It has drawings of shuttlecocks and badminton rackets on it, along with the words “Congratulations Manasi Joshi aunty” written in different coloured crayons. 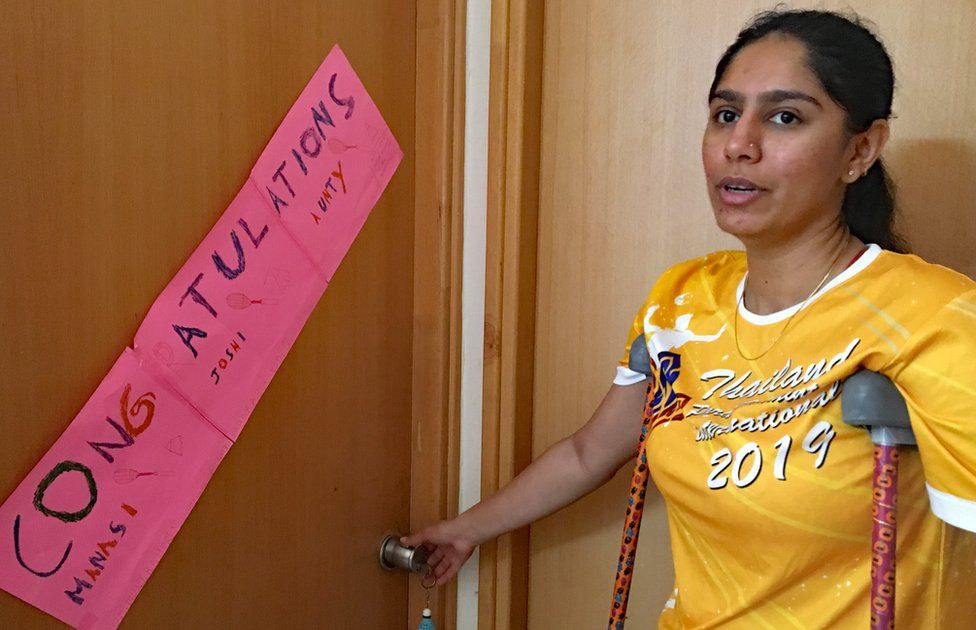 “This was the sweetest gesture. Even before I came back, my win was all over social media. So the kids of the building pasted this poster right on our front door. I wasn’t there so my flatmates took it and pasted it on my bedroom door,” she says.

Inside her bedroom, Manasi shows me some of her medals.

There is, of course, the glittering gold World Championship medal. But she says her favourite is a Bronze she won at the Asian games. It has text in Braille and makes a jingling sound when you shake it. She says the amount of particles in each medal differs between Gold, Silver and Bronze, so that each medal makes a different sound. This allows visually impaired athletes to immediately identify what they are holding.

“That is the inclusive design or society I wish to live in. Where we consider everybody even when we give out trophies,” she says.

Now, Manasi has set her sights on her next goal – getting chosen for the Paralympics in Tokyo.

She won the World Championship playing singles, but there is no singles event in her disability division at the Paralympics, so she hopes to compete by playing doubles instead.

Playing doubles may be new to her, but the one thing she has demonstrated is the ability to excel in unfamiliar situations.