The ART’s ‘Escape’ video tackles the touchy subject of anxiety 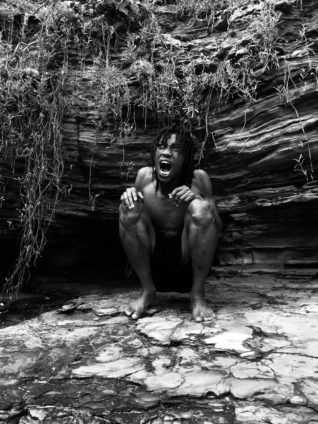 It is not your ordinary visuals to a song as one would expect. ‘Escape’ portrays the disparities between anxiety and its potential impact on people.

That’s where The ART comes in.

The expressive artiste creates a dual persona around which the setting is established – one as himself and the other as his subconscious.

“The ART and The Plague are representations of the mental struggle that comes with anxiety. A divide that exists to complement each other but appear as opposites at first glance.”

Clad in bandages, he is seen moving sporadically with no clear-cut motive to his motion.

Unravelling on a desolate island, it is pivoted around the need for peace of mind, serenity, as he is trapped in a stone prison by The Plague (his subconscious) hence his need for ESCAPE.

The ART, known in real life as Yassin Issa Adams, looks depressed in the 3:42-minute video directed by Protégé Visuals.

The musician explained that “as touchy as mental topics may be, I still wanted to visualise for many to see, be entertained and educated, and more importantly build resilience and character in themselves.”

The video was released in December, 2021.

Though, the song itself was released back in October 2020, many music lovers recently started getting drawn to the lyrics and its unique message.

The video is the icing on the cake for the alternative sound.

The ART says it demonstrates his “undying need to take myself out of a state of stress and pain caused by anxiety.”

Mental wellbeing is a delicate subject that is barely explored especially in Africa.

However, that is the gap The ART is optimistic of bridging through his artistic piece.

“The ART and The Plague are representations of the mental struggle that comes with anxiety. A divide that exists to complement each other but appear as opposites at first glance.”

In this abyss, he finds freedom, hopefully.