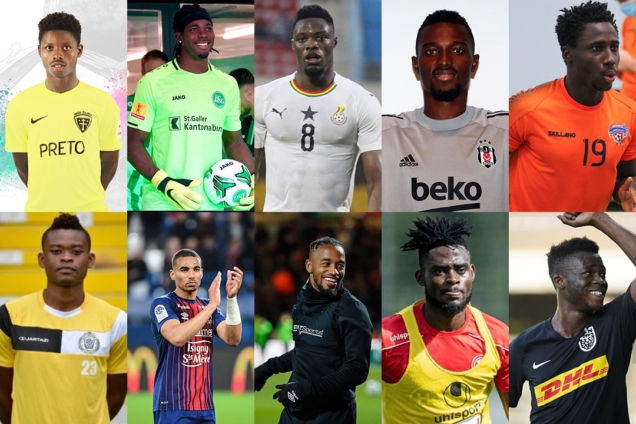 An international break that presented contrasting fortunes which saw the Black Stars lose embarrassingly to Mali and win comfortably against Asian champions Qatar.

Friendlies are meant to give coaches an opportunity to run the rule over his players and CK Akonnor has certainly learnt a lot from these games.

With key players such as Mubarak Wakaso, David Duncan, Lumor Agbenyenu and Kudus Mohammed all absent, it was a chance for fringe players to prove their worth.

Here are the biggest winners and losers from the Black Stars friendlies.

Tariqe Fosu justified his debut call-up by impressing in both games.

Against Mali, he demonstrated his versatility by playing as a full back. He played in his much favoured wing position against Qatar and scored his first Ghana goal in the process.

His directness, pace and skill are attributes the Black Stars have lacked over the years and it looks like Fosu will be getting another call-up in November.

Prior to the international break, Ghanaian fans were putting pressure on the Ghana Football Association to convince Tariq Lamptey to play for the Black Stars.

Well, it looks like we had our own Lamptey all along. His name? Benson Annan.

He had his chance in the game against Qatar and didn’t put a foot wrong making the position his own. Ghana’s lack of depth at the right back spot could see Annan called again in Sudan.

Samuel Owusu played in the 2019 Africa Cup of Nations and is expected to be a full international by now.

However, his poor performances in the tournament left doubts as to whether he could replace Christian Atsu on the right wing.

Against Qatar, he put in a man of the match performance to allay any doubts. His eye for goal and work rate ensured that he will be kept in Akonnor’s mind for next month.

Caleb Ekuban was a late call-up and had to come into the team after John Antwi failed to make the trip due to visa complications.

Despite getting just 23 minutes over the two games, Ekuban was still ever present and marked his presence with a goal against Qatar.

The goal meant that the 24-year-old currently scores a goal every 49 minutes for Ghana. A weapon Akonnor might want to have on the bench going forward.

Alexander Djiku was one of the players who were convinced to switch nationalities as he opted to play for Ghana instead of France.

The Strasbourg defender played the full 90 minutes in both friendly games, an indication that he was doing something right.

The fact that Djiku could play as defensive midfielder and as a center back makes him a prime candidate to make the squad against Sudan next month.

CK Akonnor justified the call-up of Eugene Ansah by stating that he offered directness upfront and would help the national team.

“I like players who at a point, can bring confusion into the opponent’s defense, constant disturbing in terms of making trouble, try to create chances and score goals and he is one of the guys who takes chances and also good at one on one situations,” Akonnor said.

Despite scoring eight goals in 36 appearances in the last two seasons for Hapoel Shmona, the forward failed to utilise his opportunity lasting just 40 minutes on his debut against Mali. The 25-year-old was an unused substitute in the win against Qatar, a suggestion that he might have missed out a golden opportunity to stake a claim in the Black Stars.

He came into these friendlies with a lot of expectations having started his journey Besiktas on an inspiring note.

Unfortunately, he couldn’t translate his club form against Mali and he was supressed in the middle of the park.

As a result, Mensah didn’t feature in the victory against Qatar. A hint that he might have lost out on his chance.

Second choice goalkeepers barely get the chance to prove how good they are because the number one is always in post.

Ati-Zigi had his rare chance after Richard Ofori failed to make the trip to Turkey due to visa issues. A chance Ati-Zigi failed to grab after conceding three avoidable goals.

With Richard Ofori set to return coupled with the performance of Razak Abalora, Ati-Zigi might have just fallen down the pecking order.

Despite making just one appearance this season for TSG 1899 Hoffenheim, Nuhu still had the trust of Akonnor and was rewarded with a call-up.

However, a chaotic performance against Mali has left his Black Stars future hanging in the balance especially with rise in prominent defenders for the national team.

The return of Mohammed Salisu could see Nuhu through the exit door.

Every player dreams of playing for the national team when young. Maybe, Kamaldeen’s dream might have been realised a bit too soon.

At just 18 years, the Nordsjælland was handed his national team debut and enjoyed cameo appearances against Mali and Qatar.

He didn’t impress as he was starved off the ball but that could be due to his lack of experience. A relegation to the Ghana youth teams could be beneficial to his development.

DISCLAIMER: The Views, Comments, Opinions, Contributions and Statements made by Readers and Contributors on this platform do not necessarily represent the views or policy of Multimedia Group Limited.
Tags:
Black Stars
Black Stars squad
CK Akonnor
Mali
Qatar