He’s only 16, but already plays for one of the world’s biggest soccer clubs and has more than two million followers on social media.

Even in a sport that is littered with scores of promising teen prodigies and even more broken dreams, the young Paris Saint-Germain midfielder stands out.

The young Dutchman, a former captain of a number of Barcelona youth teams, is a four-time winner of the youth Ballon d’Or award. He has 2.1 million followers on his Instagram account alone, and has already landed a sponsorship contract with Nike.

Born in Amsterdam in 2003, Simons moved to a small village near Alicante in Spain with his family when he was three years old. Named after Spain and FC Barcelona star Xavi Hernandez by his father, former Dutch soccer pro Regillio Simons, it was no surprise he took up the sport at an early age.

Xavi Simons turned out to be so gifted, he joined the famous youth academy of FC Barcelona when he was just seven. 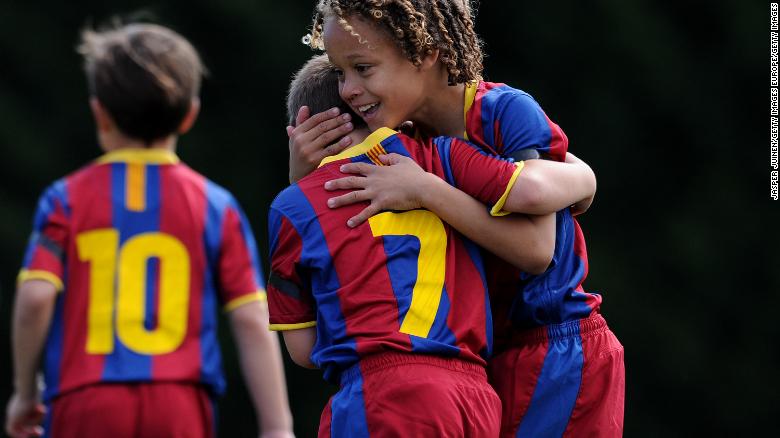 An eight-year-old Xavi Simons (right) celebrates a goal with a teammate during a 2011 match for FC Barcelona’s youth team.

“My father has always been an example for me,” Simons told Dutch state broadcaster NOS in a rare interview last month. “My father knows everything about football.”

When asked by the interviewer when his father, a youth trainer who played for Dutch clubs including Fortuna Sittard and NAC Breda, realized his son was so talented, Simons said: “I don’t know, because he has never said that to me … He can be critical of me, because he is also a football coach, he always tells me the truth.”

In July, Simons stunned Barcelona fans when he announced he would be leaving the Spanish club to play for Ligue 1 champions Paris Saint-Germain (PSG) after signing a three-year professional contract.

Simons’ departure from Barcelona after almost a decade at the legendary club came as a shock for a lot of fans. “PSG sign Xavi Simons, the jewel of Barcelona’s academy,” headlined Spanish newspaper Marca.

“I leave a part of me in Barcelona and I will bring a part of Barcelona with me,” Simons said in a post on social media about his departure.

Simons now plays for PSG’s Under-19 squad, and occasionally trains with the first team.

Although Simons is only 16 and just starting his pro career, he has already made a huge impact on social media.

Regular Instagram posts show him training, playing matches or hanging out with his team mates and friends.

“The brand association, the brand identity of having been with Barcelona, it’s an instant credibility, an instant street value with all those followers,” Alan Seymour, a British university lecturer and digital sports marketing consultant, said in a phone interview. 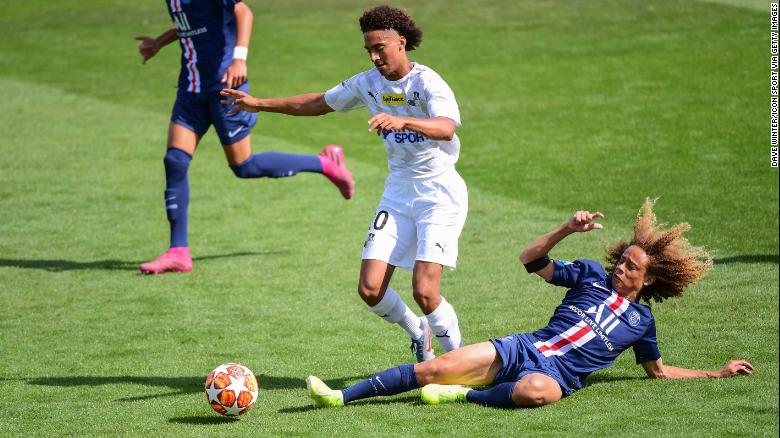 PSG’s Xavi Simons (right) in action during the Under-19 match between Paris Saint Germain and Amiens on September 8, 2019 in Paris, France.

How good is he?

It isn’t easy breaking through to the first team at elite European clubs — just ask Martin Odegaard. In 2015 the Norwegian became Real Madrid’s youngest player just five months and six days after his 16th birthday. But Odegaard’s career stalled at the Bernabeu and he is currently on loan at Real Sociedad.

All of this begs the question: just how good is Xavi Quentin Shay Simons?

“Is he a miracle child?,” Orlando Engelaar, Simons’ former business manager, told FOX Sports in the Netherlands in November 2018.

“He is really good, but his popularity is also due to the fact he is with Barcelona and his social media … He is in the spotlight,” said Engelaar, a former FC Twente player.

“Back in the day, if you were a prodigy, not everyone would know,” says Engelaar. “But now he is followed all over the world. We were getting dozens of emails a week for this kid, from Russia, Abu Dhabi, China.”

“Sportspeople are becoming younger and younger,” said Seymour. “The danger is plentiful. There have been many instances of prodigies never even getting into a level of performance that could justify them being a professional.”

Regillio Simons, an experienced youth trainer for clubs including Ajax Amsterdam, has been trying to keep his son away from the limelight as much as possible for most of his pre- and early teenage years.

“For a long time, we tried to keep quiet that Xavi played for Barcelona,” Regillio Simons told Dutch newspaper Algemeen Dagblad in April. “Let him play soccer, let him develop. He is not trying to become world famous, he wants to become a good soccer player.”

Simons’ controversial move from Barcelona to PSG was orchestrated by his agent, Mino Raiola.

The Italian-born Dutchman is one of the most powerful agents in soccer, who earned $70.3 million in commissions in the past year, according to Forbes.

Raiola, the man behind Paul Pogba’s record €105 million ($115 million) move from Juventus to Manchester United three years ago, has 70 players in his stable, including Juventus and Holland star Matthijs De Ligt.

If Simons had stayed at Barcelona, he may one day have played alongside Argentine superstar Lionel Messi in the first team. But for Simons, his move to Paris was all about growing as a player.

“Of course, Messi is the best player in the whole world, everyone dreams of playing with him, but sometimes, you have to choose a different path,” Simons told NOS. “I think it will be good for my development.”

Although clubs are conscious of protecting the health of their developing young players, soccer doesn’t have an age eligibility rule, like for example, women’s tennis, which in the past has seen its fair share of teenage prodigies shining brightly before burning out.

Take Cori “Coco” Gauff, the 15-year-old American who set Wimbledon and the US Open alight with stunning runs this summer.

Under the current age rules of the women’s WTA Tour, which were implemented two decades ago to protect the health and careers of young women, Gauff can only play a maximum of 14 events until her 16th birthday in March. She is not allowed to play a full schedule until her 18th birthday.

In soccer, players such as Simons can sign a professional contract from the age of 16.

“The responsibilities here lie not just with the agent and the player, but there has to be some responsibility here with the regulatory bodies, the football clubs who are part of the deal themselves,” said Seymour.

Simons’ talent has not gone unnoticed in the Netherlands either. He has played for Holland’s Under-15 and Under-17 teams, and is part of an Oranje youth squad that will be playing a tournament in the US starting November 14.

Although Simons has a Dutch passport, he is also eligible to play for Spain. Under the current rules of soccer’s global governing body, FIFA, a player won’t have to commit to a national team until he or she takes part in a senior competitive match at a national level.

For now, Simons said he is committed to his Dutch roots.

“I feel proud when I am here,” Simons told NOS about playing for the Netherlands. “I am enjoying playing with other boys I don’t normally play with. Representing your own country is a beautiful thing.”