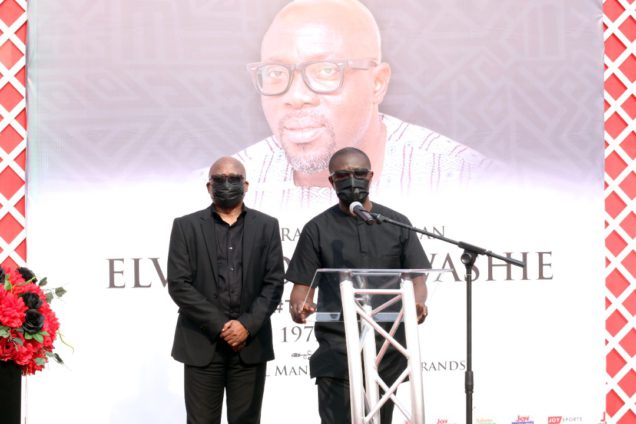 The Multimedia Group (MGL) has organised a remembrance service for the late General Manager of Joy Brands, Elvis Kwashie.

The service, held on Wednesday, was to commemorate one week of his passing.

After a short illness, Mr Kwashie died at the University of Ghana Medical Center (UGMG).

Hundreds gathered at the forecourt of MGL to mourn his passing.

Delivering words of encouragement, the presenter of Joy FM’s A Walk with Jesus, Pastor Ato Acquah, said although mortals may not comprehend why Mr Kwashie exited so soon, God knows best.

“Sometimes, God uses death to end the pain,” he told the gathering.

For the staff who took turns to recount fond memories of their former boss and colleague, they described him as an epitome of leadership and talent groomer.

“You led a team driven by a need to impact society. A team poised to succeed. You instilled in everyone a sense of belonging and unity. You were not just a news editor; you were a peacemaker, brother, father, and friend,” Fiifi Koomson spoke on behalf of members of the JoyNewsroom.

Kweku Owusu Preprah, who spoke for Joy Brands, said, “We are at a crossroads and we wish we could wish away your departure. We hope that we will wake up from this nightmare.”

The Adom Brands Manager, Abdulai Awudu, recalled the times Mr Kwashie brainstormed with him on strategies that could help grow the media conglomerate.

“Our hearts are warmed listening to the testimonies of Elvis’ subordinates and colleagues about how great a boss he was.

“Elvis did not start as a boss, but what has worked well for him over the years that we all must learn from is the value system that he kept faith with and has passed on to the younger generation.

“Our best testimonies will not be about the tears or the pain but to live that value system so that future generation can also pick from us,” Mr Oppong intimated.