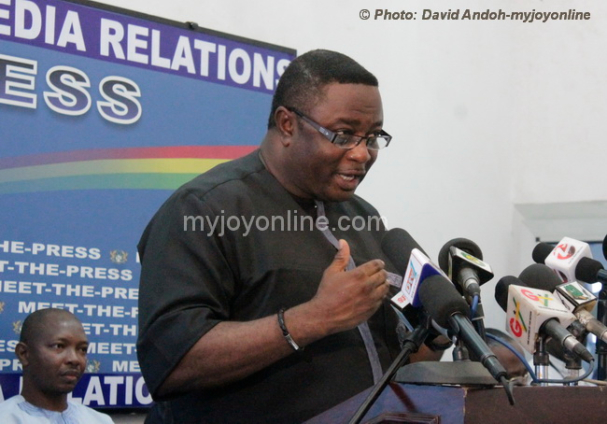 Youth and Sports Minister Elvis Afriyie Ankrah has justified comments by President John Mahama that even if government paved all roads in Kumasi in gold, it will still not be appreciated.

The president has come under a barrage of criticisms after he was heard on a tape recording repeating an Akan adage that 'no matter how well the chicken dances, the hawk will never be impressed.' He also added that, even if all the roads in the Ashanti Regional capital, Kumasi, (the strong-hold of the opposition New Patriotic Party) were paved in gold, the government's efforts will still not be appreciated.

The comments have been roundly condemned as divisive and even ethnocentric, compelling government to issue a clarification.

Government in a release Wednesday claimed portions of the tape containing the president's comments have been doctored.

According to deputy Information Minister, Felix Kwakye Ofosu, the president neither mentioned Ashantis nor residents of Kumasi in his critique.

Reinforcing that position, Mr. Afriyie Ankrah, who called into the Super Morning Show on Joy FM, Thursday, said there was nothing wrong with the president's comment.

According to him; "whoever doctored the tape had a specific motive to make it look like the president was referring to the people of Kumasi".

"Doctoring of tape is a very serious offense; it's diabolical and it's criminal and it should to be condemned," the Deputy National Campaign Manager for the 2008 and 2012 Presidential Campaigns of the National Democratic Congress said.