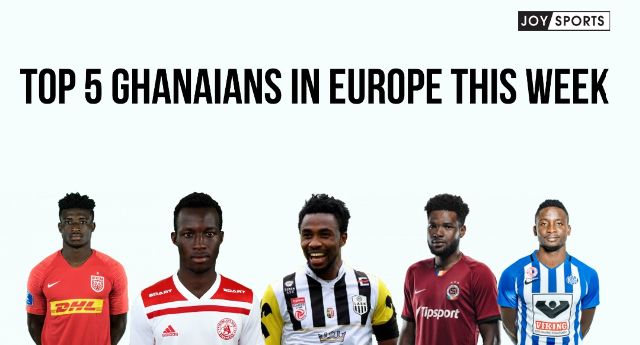 A week for the young guns as all five candidates found the back of the net with the oldest being just 23 years old. Here are five standout Ghanaian players from the weekend, picked by Joy Sports Owuraku Ampofo.

The teenage sensation continued his hot form after scoring over the weekend against Randers. FC Nordsjælland won the game 3-0 and Kudus grabbed the first goal of the game.

The goal caps off what has been a fantastic week for the 19-year-old after he scored his debut goal for Ghana against South Africa during the international break.

Kudus has managed six goals in just 10 starts for FC Nordsjælland in the Danish Superliga this season.

Samuel Tetteh came off the bench in the second half to score LASK Linz’s second goal as they defeated Tirol 2-0.

The former Ghana youth striker scored a well-taken goal in the 90th minute as Linz closed the gap at the top to just one point.

Tetteh has three goals to his name this season in the Austria league.

Benjamin Tetteh scored the final goal of a six-game thriller as Sparta Prague were held by SK Dynamo.

The 22-year-old salvaged a point for Sparta Prague in the dying embers of the game with a cracking goal.

The goal was Tetteh’s fourth of the season in 17 appearances.

Dauda Mohammed scored his debut league goal to help Esbjerg FB get their first away win in the Danish Superliga over the weekend.

The former Asante Kotoko forward scored the match-winner in the 70th minute as his side came from a goal down to win 2-1 against Silkeborg IF.

Mohammed now has two goals in 10 appearances for Esbjerg this season.

Osman Bukari continued his hot streak of form as he scored his fourth goal in five games for Trencin over the weekend.

The explosive winger scored the only goal of the game against Spartak Trnava. Bukari had to take an early shower after picking up a red card in the 87th minute.

The 20-year-old has four goals in the Slovakian Super Liga this season.