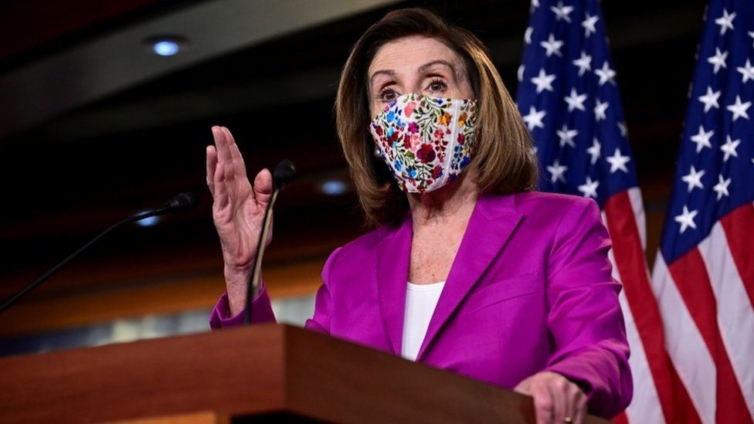 US Democrats plan to introduce an article of impeachment against President Donald Trump for his role in Wednesday’s invasion of the US Capitol.

House Speaker Nancy Pelosi said she would move forward with impeachment if Mr Trump did not resign immediately.

The charge of “incitement of insurrection” is set to be introduced by House Democrats on Monday.

They accuse Mr Trump of encouraging a riot in Congress in which five people died.

President-elect Joe Biden said impeachment was for Congress to decide, but said he had thought “for a long time President Trump was not fit to hold the job”.

The White House dismissed the impeachment as a “politically motivated” move that would “only serve to further divide our great country”.

If the process does go ahead, it would be the second time the House of Representatives has pursued impeachment against President Trump.

In December 2019, the House impeached Mr Trump on charges of abuse of power and obstruction of Congress. But the Senate acquitted him on both charges in February 2020.

No US president has ever been impeached twice. However, the prospect of an impeachment conviction is remote because of Mr Trump’s Republican support in the Senate.

That means an impeachment in the House would only be a symbolic action to hold Mr Trump accountable for the invasion of Congress.media captionTrump calls for an ‘orderly transition of power’ to the Biden administration on January 20th

The unprecedented move comes as Mr Trump’s administration plunged deeper into crisis on Friday, as more officials resigned in protest over the riot, and prominent Republicans disavowed the president.

The siege of the Capitol has put senior politicians on edge, prompting the Democratic Speaker Pelosi to talk to the nation’s top military officer about ways to prevent Mr Trump from accessing nuclear codes.

What does the draft impeachment resolution say?

The draft resolution, which has been shared with BBC partner CBS News, consists of one article: “incitement of insurrection”.

“Donald John Trump engaged in high Crimes and Misdemeanours by willfully inciting violence against the Government of the United States,” the draft reads.

In the resolution, the lawmakers accuse the president of making statements that encouraged and resulted in “imminent lawless action at the Capitol”.media captionWhat does it take to impeach a president?

The draft also says this was “consistent with his prior efforts to subvert and obstruct” the certification of President-elect Biden’s win in November’s presidential election.

“He thereby betrayed his trust as President, to the manifest injury of the people of the United States,” the draft says.

The president urged his supporters to march on the Capitol on the day Mr Biden’s electoral college victory was to be confirmed by Congress.

He held a rally at which he repeatedly cast doubt on the legitimacy of the presidential election, alleging, without evidence, that it was “stolen” from him.

“We’re going to walk down to the Capitol and we’re going to cheer on our brave senators and Congressmen and women,” Mr Trump told the crowd, exhorting his supporters “to fight”.

Democrats and some Republicans have alleged that these words amounted to incitement.

Impeachment allows Congress – the part of the US government that writes and brings in laws – to put presidents on trial.

Articles of impeachment are charges brought against a president by the House of Representatives. If the House votes to pass them, proceedings move to the Senate, which decides whether or not to convict.

It is a rare event and a political process, rather than a criminal one.media captionThe impeachment saga from beginning to end

Mr Trump was third US president to have been impeached.

The two others, Bill Clinton in 1999 and Andrew Johnson in 1868, were left in office by the Senate.

President Richard Nixon resigned before he could be impeached.

In the wake of the Capitol riot, there were immediate calls for President Trump to face impeachment for a second time.

On Wednesday, with Washington still reeling from the violence, Democrats held a conference call in which they talked for three hours about the prospect of removing the president from office.

CBS News reports that Democrats were overwhelmingly supportive of the effort, with just one, Oregon Representative Kurt Schrader, arguing that such a move would be too divisive for the country.

Speaker Pelosi told her members that her preference would be to see Mr Trump removed by the 25th Amendment, which allows the vice-president to step up if the president is unable to perform his duties owing to a mental or physical illness.

If that did not happen, impeachment would be on the table, she said.

There is no sign that Vice-President Pence is prepared to do use the 25th Amendment.

On Friday, Ms Pelosi called Mr Trump “unhinged” and said Congress must do everything possible to protect Americans while he is in office.

In a later statement, Ms Pelosi said the House Democratic Caucus had a “sad, moving and patriotic” discussion about the possibility of impeachment.

Ms Pelosi was expected to discuss the matter with Mr Biden on Wednesday afternoon.

The president-elect did not express a preference for action, saying at a Friday press conference: “What the Congress decides to do is for them to decide.”