Trump to send ‘surge’ of hundreds of federal agents to cities 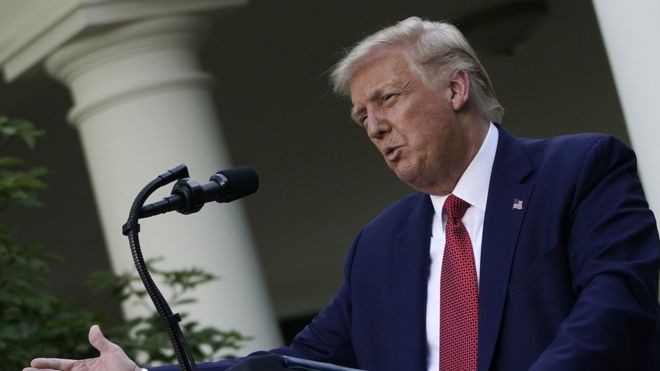 President Donald Trump is to send “a surge” of federal security forces to US cities in a crackdown on crime.

Chicago and two other Democratic-run cities are being targeted in the Republican president’s move, amid a spike in violence.

But federal deployments in Portland, Oregon, have proved controversial. Local officials say they have raised tensions amid ongoing protests.

Since the death on 25 May of an unarmed black man, George Floyd, in police custody in Minneapolis, Minnesota, there have been protests – sometimes descending into civil disorder – in scores of US cities.

What is Operation Legend?

It is named after a four-year-old boy, LeGend Taliferro, who was fatally shot in the face while sleeping in his family home in Kansas City in June. The boy’s mother joined the president at Wednesday’s announcement.

Mr Trump said: “This rampage of violence shocks the conscience of our nation.”

The president, who accuses Democrats of being weak on crime, said: “In recent weeks there has been a radical movement to defend, dismantle and dissolve our police department.”

He blamed this for “a shocking explosion of shootings, killings, murders and heinous crimes of violence.”

He added: “No mother should ever have to cradle her dead child in her arms simply because politicians refused to do what is necessary to secure their neighbourhood and to secure their city.”

US Attorney General William Barr, who was also with Mr Trump, said they had sent about 200 federal agents to Kansas City, Missouri, would send a “comparable” number to Chicago, and about 35 others to Albuquerque, New Mexico.

More than $60m in federal grants is also being made available so that more police officers can be hired in the affected cities.

Mr Barr said the expanded federal law enforcement would involve “classic crime fighting”, unlike the deployment of Department of Homeland Security agents to “defend against riots and mob violence” in Portland, Oregon.

What is going on in those cities?

The officers quickly used crowd-control munitions in an attempt to disperse hundreds of people gathered outside a federal court.

The agents have been accused of driving in unmarked vehicles around Oregon’s biggest city while wearing military fatigues and arbitrarily arresting a handful of demonstrators.

Chicago Mayor Lori Lightfoot confirmed on Tuesday that federal agents would be deployed to her city to beef up local police.

“We welcome actual partnership, but we do not welcome dictatorship,” Ms Lightfoot told a news conference, warning that the federal officers should not try the same tactics they have used in Portland.

In the latest incident in Chicago, at least 14 people were shot outside a funeral home in a suspected gang-related attack.

The city has seen 34% more homicides than last year, according to the Chicago Sun-Times.

Kansas City, meanwhile, is on track to record its most homicides ever in 2020, according to the Kansas City Star. The city has now seen 110 homicides, with another 50 recorded across the greater metro area.

Traditionally crime-fighting programmes are popular during election campaigns, and critics of the president say this initiative is directed more at his conservative supporters in the rural heartland than those who live in Kansas City and other urban areas.

Mr Trump’s critics say the initiative is not really an effort to fight urban crime, claiming it is simply a way to drum up enthusiasm among the president’s base of supporters before the election.

DISCLAIMER: The Views, Comments, Opinions, Contributions and Statements made by Readers and Contributors on this platform do not necessarily represent the views or policy of Multimedia Group Limited.
Tags:
Federal agents
Trump