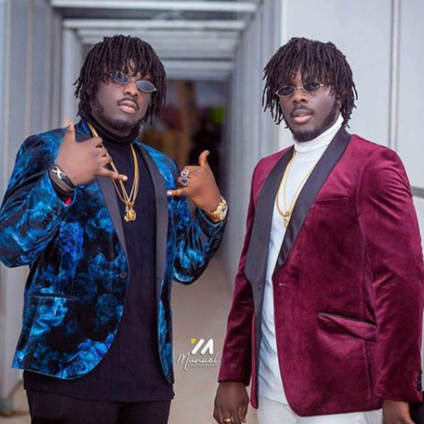 The hitmaking duo consisting of Micheal Boafo (B2) and Tony Boafo (Twist) find the ‘Angela’ hitmaker’s comments surprising and shocking saying they would rather his comments be congratulatory.

Kuami Eugene told Hitz FM’s Doreen Avio that although he does not know why the duo decided to sign out after only a year with the label, he stated that their decision to work on their own was a brave one.

“I think there is time for everything. If this is the time for them to leave and they have been able to muster courage and be on their own, may God help them and I am so happy for them,” he stated.

Kuame Eugene said that DopeNation leaving Lynx Entertainment does not spell the end of the world for the label, but instead, the start of a new chapter.

But speaking on Hitz FM, the ‘Zanku’ hitmakers said, “It was an interview that came up and he expressed his opinion on our departure from Lynx entertainment and I think with what he said and what we heard, we were not satisfied with the comments”.

DopeNation said they did not see it as the artist’s responsibility to announce their departure and the end of their contract with Lynx Entertainment.

“We were shocked when he made all those comments,” they said.