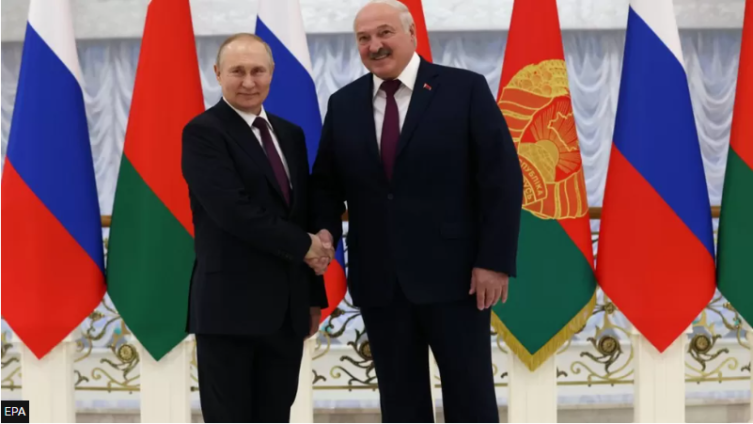 Ukraine is tightening up the defence of its border with Belarus over fears that Russia may be preparing a fresh attack, a government official has said.

Deputy Interior Minister Yevhen Yenin told the BBC Ukraine would be bolstering the Belarusian border with armed forces and ammunition.

Belarus shares a border with Russia as well as Ukraine.

The Russian president later ordered the strengthening of Russia’s borders and of social control within Russia. He said the security services should quickly thwart any attempt to violate Russia’s borders, combat risks coming from abroad, and identify traitors and saboteurs.

He also said the special services should ensure the safety of people living in the parts of Ukraine that Moscow claims as its own. In some of these areas, most notably Kherson, Russia recently suffered significant military reverses.

Reacting to this and the visit Mr Yenin confirmed: “We are building up our defence lines all across the border with Russia and with Belarus.”

While Belarus has not become involved in the war directly, it did allow Russian troops to use its territory to launch the invasion in February.

Minsk is coming under increasing pressure from Moscow to step up its support in the “special military operation”.

President Putin flew to Minsk for talks with President Lukashenko – the first time in three-and-a-half years the pair have met in Belarus.

The meeting has been described as a “working visit” and lasted for more than two hours.

Speaking at a joint press conference President Putin said Russia did not want to “absorb” anyone. He also said that unspecified “enemies” wanted to stop Russia’s integration with Belarus.

Speaking later on Monday, US state department spokesperson Ned Price said Putin’s statement was the “height of irony” given he was currently seeking to absorb Ukraine.

DISCLAIMER: The Views, Comments, Opinions, Contributions and Statements made by Readers and Contributors on this platform do not necessarily represent the views or policy of Multimedia Group Limited.
Tags:
Russia
Ukraine